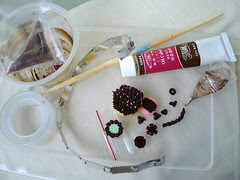 ok i goofed. i thought i picked up the tube of acrylic paint, only when i started taking pics did i realize it was actually oil paints XD

i needed to do some piping/frosting for a cupcake, and after wasting 3 hrs fiddling with the nozzles and polymer clay, i gave up. since it had to be 'chocolate' cream, i couldn't use the huge tub of texture paste (base colour is white, any colour added to it would be of a pastel hue) either.

i don't remember where i posted a pic of how i used the little tips in syringes, might have been on flickr, but since ADC might dry up in the syringe itself, i decided to minimize on wastage and make mini piping bags instead.

i squeezed out a touch of what i -thought- was brown acrylic paint (that'll teach me to read labels XD ), squeezed out a small ball of grace resin clay, and mixed the two in a disposable sauce container (click on pic to see the notes in my flickr). then i added a little bit of water. by a little bit, it meant i ran my right hand under the tap, and flicked a few drops into the container. real scientific measurements, i know.

what resulted was a sticky gooey mess (thankfully not as messy as polymer clay) that i put into my home-made piping bag. Japanese ADC miniaturists have been using the 'foil cutter' nozzle for quite sometime now, i vaguely recall posting the tutorial link somewhere on my site, but i'm too hazy to find it now, haven't eaten yet today. anyway don't cut yourself doing it. shouldn't be too hard to figure out. just don't ask me ok? i'm grouchy. as usual, after every 'experiment'. ha. 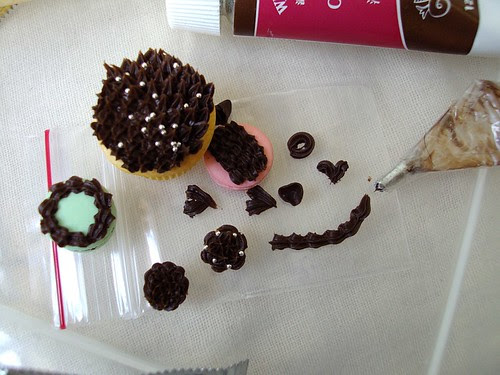 'chocolate' is hard to capture in pics. at least, it's hard for me. i hadn't intended to make the smiley face, but haha it's there XD maybe it's my subconscious at work. yea i'm definitely not smiling now. so it's all in my head. 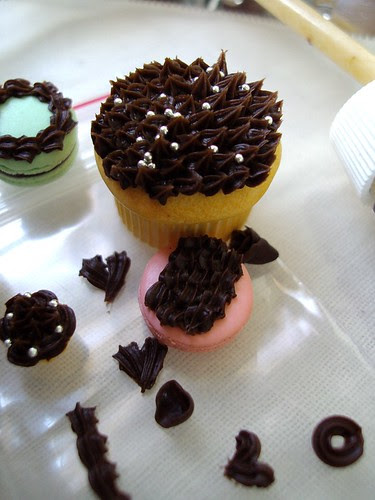 i tested on a sample 1:3 cupcake that i made out of polymer clay. i think the cream is too tiny for that scale, but i'll let it dry and scrape it off later. wanted to see if it piped nicely/adhered to the polymer clay. 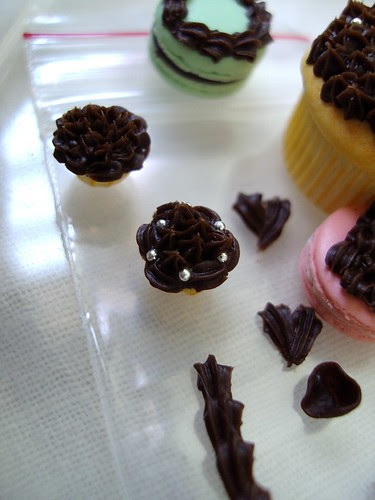 and of course, i had to try it out on a spare 1:12 cupcake XD i'm discontinuing this range of cupcake shapes, since it is not out of my own mold. i will be making available some silicone putty molds of my own design, i've made the master copy of the cupcake base but have yet to test them out on 'proper' 1:12 cupcakes. so far it's looking pretty ok....

all that remains is for the clay to dry thoroughly (2 days maybe? 3?) but so far it looks pretty cool! i will test out a batch with acrylic colours later, and report on the differences. i -think- the oil paints provide a sort of translucency/gloss to the creams, i quite like it but i want to see how acrylic colours do when mixed into just plain grace clay.

anyway. i've finally made my 100th sale on Etsy! i haven't really listed anything 'new-ish', since the bestselling items are my cupcake cases, and also cos i've been busy fulfilling promises and orders and swaps...and i have soo many ideas that require working on (remind me to post about THE GRAND PLAN that some of us TeamMids members are working on....it's kind of naughty ;) *hides behind hands and giggles*

dang, this blog/website needs some major revamping. it's near impossible to find my posts XD

oh, and don't know if anyone really cares to read this, but please, don't ask me anymore questions about how to use clay, what i use for making my miniatures, etc. if you haven't gleaned the info you needed from my blog posts, it means i can't help you further. i think i'll write up an FAQ. i'm kinda sick of repeating myself. which adds to the grouchiness. :X