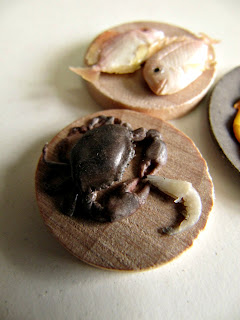 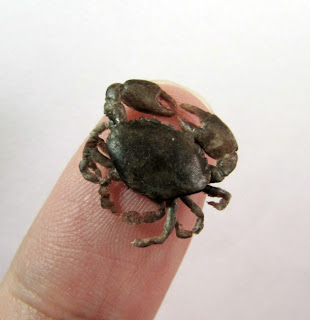 HI!!!! the weather's been wet all day, and it's nice and cool now. my health has not been very co-operative, which means less opportunity to mini T-T but i haven't stopped, just not taken time to blog. I did update a number of these photos to my facebook page though *nudge nudge*

the mud crab was really fiddly but...I DID IT I DID IT! only took me like, 2 whole days to make this ONE crab XD WHATEVER, I DID ITTTTTTTTTTTTT!!!!!! 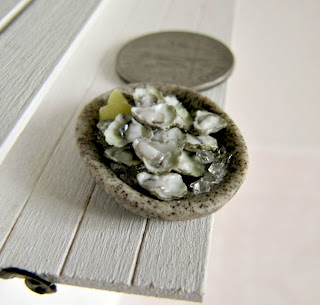 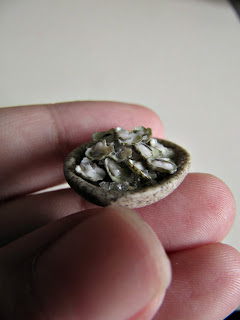 after my previous entry, re: last post on shellfish, i continued on the seafood theme and made these mini oysters, but my shoulder worsened (inflammation) so all mini work was halted in an attempt to get it properly healed, otherwise there's always this tendency to 'work through the pain', which isn't a good idea in the long run....i guess my posture while working on minis isn't the best, hunching over and squinting while working on items = frozen shoulder = OWWIES. 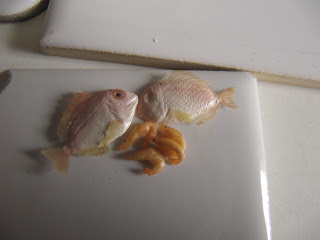 fish is SO FUN to make!!! Kiva makes some of the most realistic mini fish (and foods!) i'd seen, and she often blogs about how she gets on a fish kick, I CAN SEE WHY NOW!!! they were indeed fun to make, though i think i have to work on making them look less...smiley?

/grumble on
i've made a few more other types of seafoods, but they're all kinda jumbled up waiting to be assembled, i feel kinda guilty 'abandoning' them and even dreamt of the assemblage process last night -_-" but i find it so hard to feel motivated when i'm always in pain, or itching from my rashes (which in turn keeps me away from assembling the stuff cos i have to use resin, which would in turn cause my allergies to flare up...vicious cycle aiyaiyai)....waiting for the renovations outside my house (lift upgrading program zzzzzz) to be completed cos i think the dust etc is the cause of my sinus/skin issues. 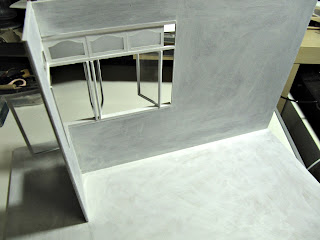 alas, no space for a proper dollhouse, so smaller scenes would have to do for now! this thing is, in my books, MASSIVE!!! the base board is approx 30x40cm?!?!??

anyways. i was determined to get to work on this piece, which is to be a new 1:12 setting for phototaking, and also to practice on working with roomboxes/settings. the windows were made almost half a year back and had been sitting in a ziploc bag while i sorted out the moving stuff, and after 2 coats of gesso, i decided to take a break and catch up on this blogging thing. the rain means it's taking a little longer to dry, i think i'll continue on it tomorrow. can you guess what it's going to be? ;)

(no prizes, but it's not very obvious although i think most people would guess kitchen LOL) 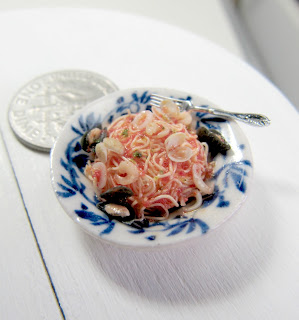 Whenever I have pasta at a restaurant, I seldom stray from familiar ones like Spaghetti, either Marinara, or Amatriciana. Over here in Singapore, the popular pasta chains make their marinara sauce with Mussels, prawns, clams and squid. 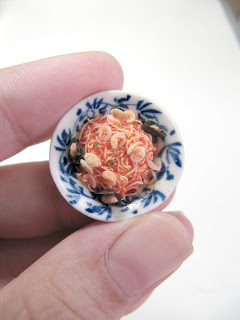 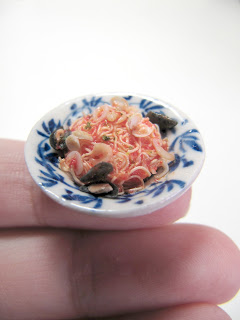 Naturally, my mini version would contain the same! This is made out of polymer clay, the plate was part of a gift or trade, I don't remember who with sorry :( Chrysnbon fork to check if it's to scale... 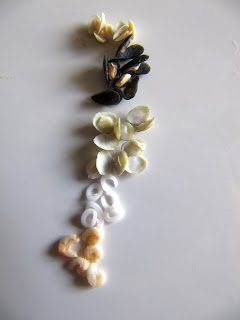 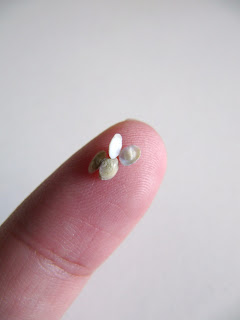 Here are the components that went into making the dish. I decided against using all of it, as it would make it look too cluttered! So the remainder will probably go into a different item :) Each clam (the smallest ones I made) measures only 3mm at the widest part of each shell......

I will be taking photos of more of my other works (sweet stuff!) but I wanted to get back into blogging, and since this was one of the more intensive items I've ever worked on, I think it deserves a post of its own ^ ^