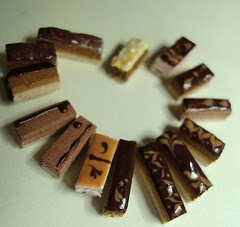 the bases were part of a previous batch, you can look through my archives for those experiment results.

so some of them, i'd already 'painted' to see if i could achieve the same cake art i use on my donuts (achieved with liquid polymer clay), so since they were sort of a failure, i decided to go ahead and bake them.

after baking, i would say the colours of the cake itself weren't as vibrant, but not -too- noticeable really. also, the ones that had the 'protective layer' from the previous experiment, the liquid polymer clay painted on a lot easier (of course), and i'd deliberately worked slowly to see if the ones without the layer would 'absorb' the polymer clay.

- LPC doesn't really get 'absorbed' into ADC very much, at least not for the 20mins or so i'd left it while i worked on the rest.

- those without sealant, although appearance wise before baking didn't seem any different, 'sunk' in a little after baking. probably got soaked into the top layer of the ADC.

- ADC might lose vibrancy of colours, perhaps more due to brand of paint i used to colour the clay?

- cracks might develop, i was expecting the ones with the 'sealant' not to crack, but it did (you can click on the pic to see the notes on my flickr). probably due to expansion of the ADC during bake process.

- no visible bubbling due to air rising from ADC into LPC, unevenness apparent in pics are due to my careless handling of the LPC (too lazy to spread it on evenly XD )

ALTERNATIVE HANDLING
- think about baking the liquid polymer clay sheets, then sticking it onto the cake slices. but have to be rather precise to achieve desirable results.

- find an easier, better air-dry medium (any recommendations other than nail polish? i remembered that i tossed away my over 30 bottles of nail polish when i moved. they had dried up in their bottles XD)

so there we have it. i think that i will still use this combination and test it a little further, since i'm using up my ADC before (hopefully) it degrades. i love the texture it lends to cake slices, and hope this experiment has been useful/interesting to those who have tried it, or are thinking of incorporating the two.