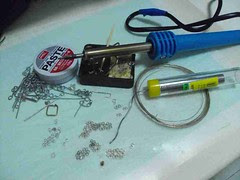 this is the 2nd time i'm trying soldering. yea. i suck terribly at it.

i managed to blister the cutting mat, my pinky finger, and the electrical cord on the soldering iron XD waha ha ha fret not, it didn't destroy the wire, i caught it before it did -too- much damage. it's now covered up with PVC insulation tape XD

i used the wrong type of wire. i vaguely recall the salesguy at the DIY store saying something about copper wire being the best to use, but i had so much wire at home from ex-jewellery projects that i decided to try it...well...XD ok so it doesn't work with stainless steel wire :P brass, pretty decently. i don't know what that coil of wire is made of, but with the flux it worked slightly better than without.

i have been really busy lately meeting up with friends and general mischievousness, but you can expect more food pics coming up as i start on a commission ;) it's very exciting because it's gonna involve stuff i've never tried before, i'm itching to start, but the clay isn't here yet.

i'm rather peeved about the clay order actually. the order came up to approx USD78 with estimated shipping, but they charged USD98 to my debit card WITHOUT PRIOR CONFIRMATION. that just pisses me off. i understand full well that it's an estimated shipping price, and frankly, the additional $20 wasn't unexpected, but COME ON. this is just POOR SALES SERVICE. to CHARGE a customer extra without informing them is just...grr.

i have previously ordered with them, and yes, their shipping is a little uhh...too much. tiny kemper cutters no more than 2" long in a box larger than 6" x 8", nearly couldn't find it in all the newspaper they used to stuff the box. they could have simply slipped it in a bubble envelope and cut shipping costs by at least USD5. but it was the first time i'd ordered anything online, so i didn't know better back then. they even sent it to the wrong address (bf ordered it, specified for package to be delivered to me, but they sent it to him)

ah well. it's the hols and maybe they were swamped. ionos. i just hope they don't try it again, or i'd have to look elsewhere. i wonder if they even sent out my order, but yea, it's the hols, so i'm not too picky about it. let's see how they reply my not-too-happy email about the 'uninformed' charge.

Email ThisBlogThis!Share to TwitterShare to FacebookShare to Pinterest
Labels: experiment