funny feedback from a customer 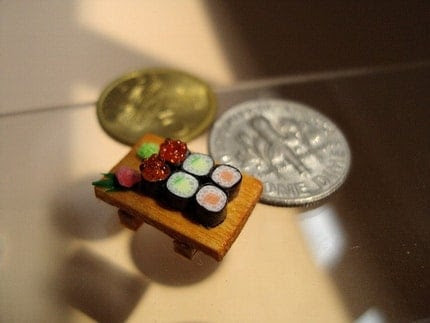 so, late last month one of my mini sushi platters sold, and recently the buyer returned with feedback (positive) that totally cracked me up!

I offered my husband some sushi...He put this tiny treasure in his mouth and wouldn't spit it out! I freaked out and his saliva made the varnish go milky. I thought it was ruined for good! But when it dried, it went back to the way it was...Phew!
Thanks so much for one of the cutest things I've ever seen!

man i laughed so hard for so long....and part of my reply was this

phew i'm glad the varnish stayed intact, it's supposed to be waterproof, i am not so sure about spit/husband proof....> <

i think this has gotta be the nicest/funniest feedback i've ever gotten yet hehehe...and i now know that saliva does not mix well with the maple varnish?? :O DO NOT ATTEMPT TO EAT MY MINIS PLEASE!!

on another note, the chipmunk is doing better, the worst of the swelling is over (72 hrs after surgery) and he's back on semi-solid foods (he was pretty much just eating baby-food the past 3 days)...

my wrist isn't so good though, only managed to roll out enough cherries to make 2 halfscale cherry pies which aren't completed yet. but my hand can't take anymore :( i think it requires another week's rest, it doesn't hurt but it curled and 'froze' up after i made those cherries. sigh. if it doesn't get better i'll have to see a doc soon. so apologies to those who've requested some items, i promised this weekend but i think it'll have to be a while more before i can get back into things. admittedly, i also worked on some acrylic furniture for my cafe so that could have held back the recovery. will have pics of those soon as i clean up the cafe, it's now cluttered with furniture that doesn't fit!
Posted by Unknown at 9:51 AM