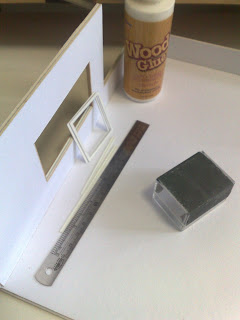 i really should change the title of these to "week" instead of "day" :P I usually try to spend a little time every morning on a few elements so that things can 'come together' rather than linearly, since i have nothing planned :P

managed to settle on some walls. again, everything is made out of mounting board, have finally used the new mounting board i purchased. it's slightly thicker than the old one, which probably shrank after sitting there for about 2 years.....*blinks* so again, all my measurements are off by a little, which is alot, in 1:24. 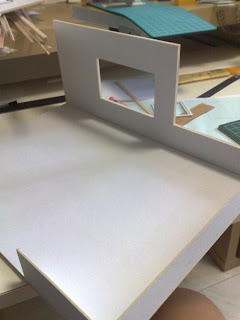 probably should have put in the window first, but i thought i'd make the window frame + sliding window and just slot it in the hole, then patch up the loose spots with spackle or the like. that's how they do the real life stuff, right? *puzzled* but of course i'd stupidly neglected the fact that my windows are..well, cardstock-thin T-T 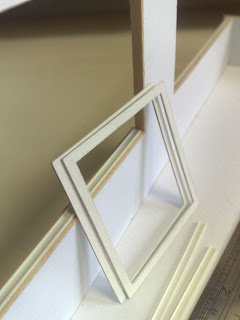 since the pieces are so darn thin, i went ahead and threw out all the planning and unnecessary anxiety out my head, stuck in the i -think- 1/16 basswood strips, as well as the styrene channel. can't remember thickness, all i recall is it's slightly wide for 1:24 but it's the thinnest one i could get. since the main part of the challenge (for me) was not to spend unnecessarily, i went with cardstock that i got from Daiso. i -think- the thickness is approx 0.5mm. probably shouldn't have skimped on this portion, i'm not sure how it'll work out after i put in the 'glass', which i haven't yet decided what i want on it. probably will use transparency film, since it's the thinnest and least flexible i have here, though i might have run out of it hrm.....:( 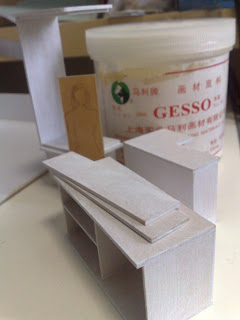 they're waiting on a coat of titanium white paint while i decide on what my 'showpiece' furniture item will be. :S 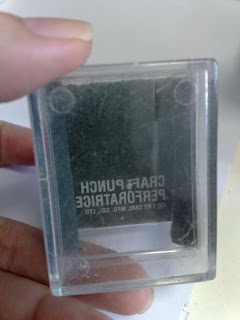 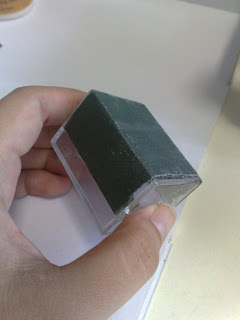 this is the sanding block i bashed together, from what i gather off various life sized woodworking sites, it's a must have tool! so i looked around my room to see what i could use for my mini projects. i used an acrylic container (used to be for a carl craft punch!) and tore out a piece of 300 grit sandpaper (might be finer, i forget) to fit. tadah~! i've been using this for all my recent wood projects. it's not really uh 'accurate' but it works very well, and i can hold it comfortably. made me wish i'd thought of this sooner when i had to sand down some chopsticks aeons ago..-_-"

the food component of this project is coming along too :) I've made some 1:24 danishes, macarons, croissants....and since i've made quite a number of 1:24 canes before, it's finally time to put them to use, YAY!!!! i can't imagine caning them down specially for this project, not when the deadline is in 1.5 mth's time :O pics coming up in a later post :) i'm super glad the boxes i made seem to work rather well too with the displays i've made.

/abrupt end to post cos i suck at signing off
Posted by Unknown at 4:35 PM