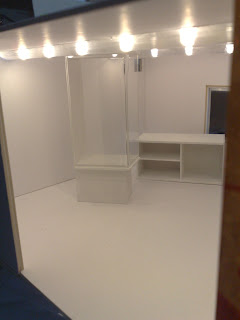 
i'm a little late again this week, had a few things to finish up, and my laptop died yesterday T-T luckily, bf, who has MAGIC HANDS I TELLSYA (well in more ways than...NEVERMIND) fixed it!!! he removed the battery, which i think overheated and short-circuited something somewhere. i've done a little bit of backup for the more important stuff, like templates and graphics etc....this poor laptop has served me very well for over 5 years, but i'm not ready to let it retire yet! :P

back to the challenge... 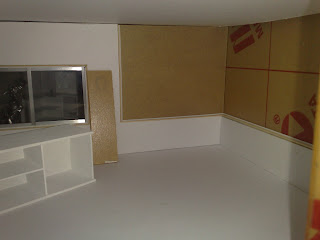 before - with flash (lousy phonecam pic) 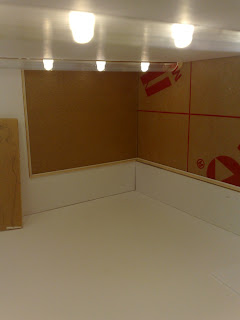 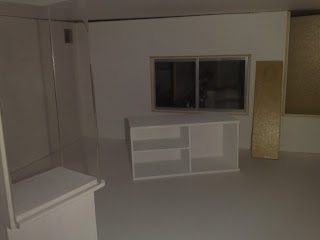 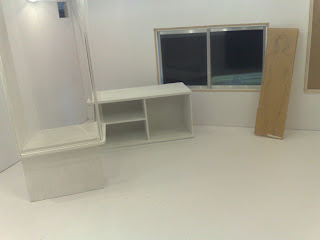 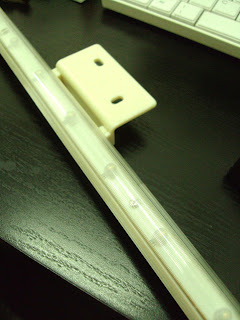 i took apart 2 IKEA 'Billy Bookcase' Lights which i'd purchased a few months back, thinking it'd be perfect for lighting a 1:12 shop....why not for 1:24 too eh?

i was thinking of putting up a 'how i did it' with photos, but it's so dead simple i don't know if it's worth the trouble. but since i have one intact (i bought 3 ;P they were so cheap, i think not more than SGD$5 each excluding 2 AAA batteries) i might if i remember to in the future :X

Still need to find some nice mosaic tile printables and figure out what sort of wallpaper/texture i'd like for both inside and out. the roof still needs to be assembled, i've cut out the pieces but haven't quite yet thought through how i'll make the light switches accessible...i like the 'hidden access' sort better than visible buttons, so that'll require a bit more work and planning. which i don't have, the deadline for this is 3 weeks away, and there's lots more for me to do yet -_-"

one of the wires came loose, and i had to whip out my soldering iron, which i'm deathly afraid of, but i managed to get it back onto the circuit and now i'm itching to try out -proper- soldering for some of the ideas i have in mind for decorating the bakery. it -is- a decorating challenge after all, isn't it?

meager update, but i'm so pleased with how it turned out. how's your dollhouse coming along?
Posted by Unknown at 4:28 PM