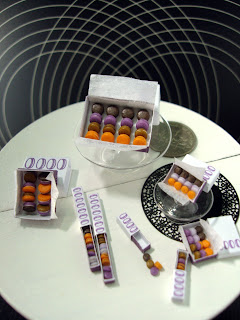 in halloween colours. I am loving this range of bold macaron colours, ever since i started on the "I'm a Giant" challenge, i've had to dig deep to figure out what i'd like to incorporate into my work, vs what i think would sell well. 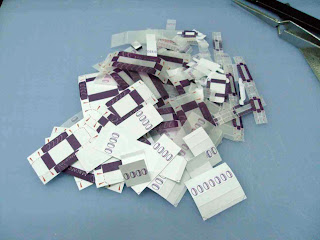 it all started with this. i made a batch of purple macaron boxes, in both 1:12 and 1:24 scale...i chose to work with slightly thinner papers (120GSM) cos i knew that it'd be difficult to fold the 1:24 boxes. 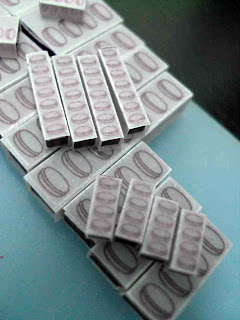 this is the paper i prefer, and will use it for my own bakery setting. it's tracing paper according to the packaging, and the blurbs stated that it was suitable for printing too. the thing is, my printer's ink (hp 1050) is not waterproof, so i had to deal with a powdery sealant (krylon matte) that worked, but irked me as i had to wipe off the powdery residue. i think it's part and parcel of using matte sealants, does anyone else have a better brand to recommend? i've tried 2 brands, a general purpose acrylic epoxy matte from the hardware store (RJ london?) and the krylon one, both leave a similar powdery residue :( i've read online that it's 'normal', well, i don't like that i might be breathing in that stuff! 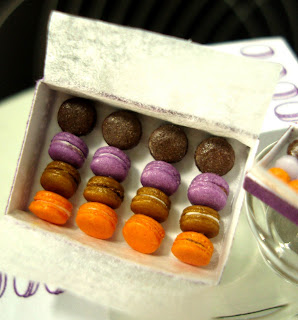 I've made some halloween coloured macarons. The idea this time was to work with colours I enjoy, and since I've moved all my stuff to the office, my wardrobe is now back in use XD looking into it revealed...that although I no longer have that many funeral colours in it, the palette resembles...well. the above XD shocking, i know *eyerolls* 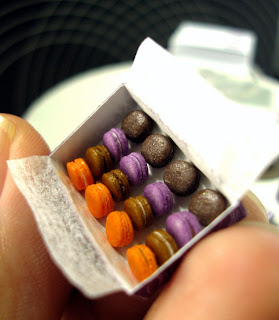 I'm really happy with the way these turned out. I previously made my macarons looking matte, cos that's what they are generally photographed to look like. However, my personal photos of macarons (that I've subsequently consumed, YUM) are more...sticky looking. colour wise, these are less one-dimensional too, which adds to the realism. What do you think? do you prefer matte or these satiny ones? 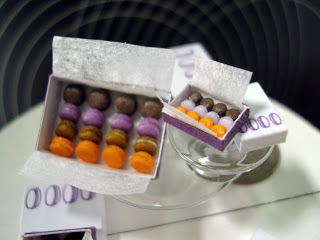 and since I was supposed to be preparing the 1:24 for my bakery, I thought to start selling them too :) I wish my camera battery hadn't run out, luckily I'd finished taking photos of the items for sale.....i'd stupidly turned off the power cord to my extension last night before i left the office, so the battery isn't ready for use yet :( and it was such a bright and sunny morning too! *sadface* 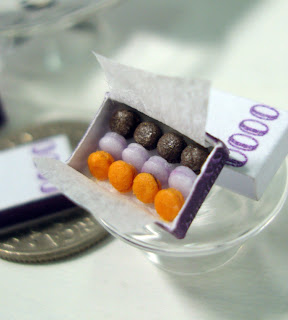 this is my fave set, for its simplicity and versatility. you can find the rest of my 1:24 macaron box sets here: 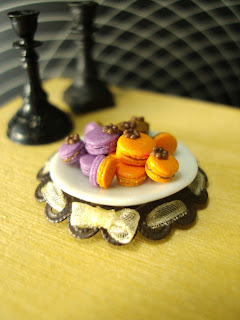 There are a few other macaron boxes and this macaron display set, also in my store now.

it's been interesting, and i'm going to move on to other 1:24 items. familiar favourites that have frustrated me the past week, my silicon putty has reached its expiration date and is no longer setting up the way it's supposed to, resulting in 2 ruined sets of 1:24 masters that i worked so hard on. looks like i'm going to have to do things the hard way. which is kind of QQ considering the sheer number i was hoping to churn out for the display window T-T ah well. try, try again seems to be how i always do things T-T I WILL DO IT OR DIE TRYING

have a great week ahead! and Happy Deepavali to those who celebrate it :)
Posted by Unknown at 11:52 AM