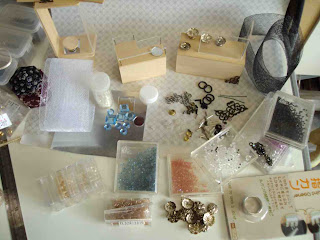 so....i have been surfing a lot more than i tend to due to this challenge, because i feel like a fish out of water. design is something i enjoyed mostly for 'clever' little functionality features like Joseph Joseph's beauuuuutiful nested mixing bowls/colanders (http://www.josephjoseph.com/preparation-bowls/nest-8) which i came across first in a random kinokinuya book that i browsed whilst cousin was looking for resources, and then at Spotlight. if ever i get my own place (yea i'm not optimistic about this) that's going straight on my list of things i want in my kitchen.

haha sidetracked again. the above pic is my 'mood board', up till Call of the Small (sorry i don't know the blogger's name!) mentioned hers (?) in a facebook post for the I'm a Giant challenge, i had no idea that such things existed, nor their purpose. i had been moaning (again) to bf for the umpteenth time about the headaches i keep getting when i try to visualize stuff. he says i'm an extreme left-brained person (wow a simple google search throws up too much jargon for me to filter through), thus my difficulty and 'inability' to look at things on a whole. i don't subscribe to too many generalizations, but there might be truth to it. on a bus ride home, he talked me through some visualization exercises and....yep, i got myself a real whopper of a headache. :P

anyhow, due to these few incidences, along with the progress that many of the participants in the challenge have made, i thought to myself, "there must be a systematic approach to this, in order for me to be more efficient at all this 'creative stuff'", and dragged out all my little random stashes i've 'hoarded' over the years. OOOOOOOOOOOOO IT WORKS O.O. i was real fired up i tells ya. previously, i tended to do the same, i have little boxes of random fave items that i often bring out so that i can try and visualize putting them together but have never thought of approaching it using colours or 'moods' as a theme (eh?) sounds silly right, that i had to jump through hoops to get here, but truly, i often feel so ....disadvantaged when it comes to the creative arts. prob explains why this blog is so whinyyyyyyyyyy ;P come, let's see what i dug up! 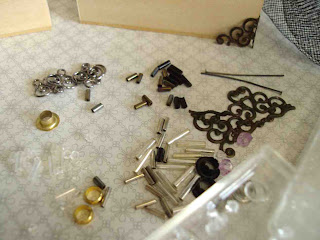 these are my fave beads and findings, most of the bugle beads and fake crystals were from my beading days. i have tonnes of different coloured miyuki delica beads begging to be used, but i didn't find them appropriate for my 1:24 needs. as Sans rightly assessed, i enjoy industrial styles best, judging from my hoardings of aluminum, teal, brass and steel coloured beads. i didn't even make all that many items out of them, i just enjoyed how they looked o.O

the filigree findings were used previously in my older photoshoot area. i didn't exactly have the same 'theme' in mind while building this 1:24 bakery/cafe(?) however now that i'm looking at these pics again, stuff is solidifying and yea....i think i'll use it still :P 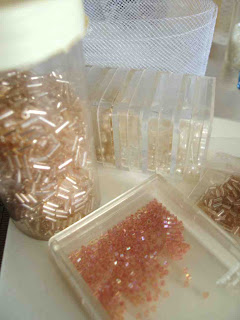 these beads....although i do enjoy the calming, airy quality to the colours (the white 'netting' behind is for contrast so i can imagine it with light bright whites)...they aren't exactly what i had in mind. i find that i tend toward bolder colours..... 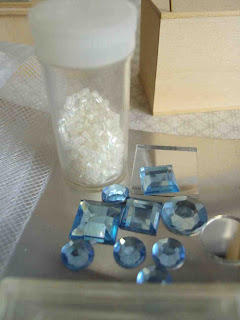 i thought about a bit of bling, and you know what, i surprised myself. i actually -do- like the pairing! i don't know how i will incorporate these yet, i do have a few ideas i'm working on and will mix and match it up, hopefully before the december XD i see little cake stands, lamp display bases made out of them.

the flat back plastic little bling pieces (donno their names) were really cheapo ones i bought at Spotlight, ages ago cos i decided to 'bling up' a cork board i had used for tacking my tatting pieces to....alas, i too had no idea what 'decoden' was back then, and it turned out rather disastrously. i think i might be able to take a photo of it, i'm pretty sure it's fallen behind my shelvings and boxes and has probably lain there for over 3 years :P 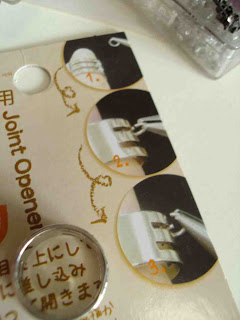 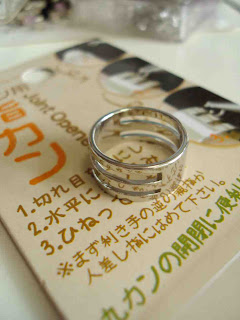 and then there's this. i got it at Daiso (yay!) thinking it would make a nice addition to a modern 1:12 scene, like a fruit bowl, or a stand of some sort, even a lighting fixture. i just had no scene to put it into. i might convert this into a modern 1:24 chandelier....hrnm. 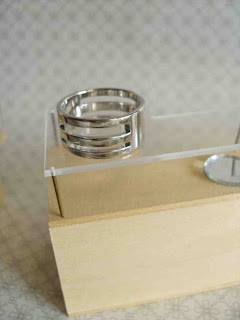 see how oversized it is for the 1:24 XD but ish shinyyyyyy i RIKES 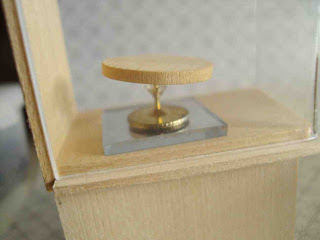 wonky 1:24 cake display thingamabob i made ages ago. using a thumb tack and wooden disk. needs LOTS of work :P 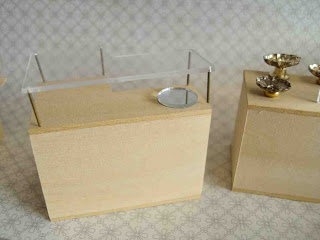 i found a stash of old mirror pieces (again, was gonna use it for beading but....-_-") and i think it'll add an interesting dimension to my food display! oh yes, the background is just one of my fave pieces of scrapbooking paper that i never had the heart to use, but i wanted to have a little bit of uh...i donno the term/word, texture? dimension? other than plain white walls and it's supposed to help me visualize.... right now i think it would work with the colours i've decided upon. ^ ^ 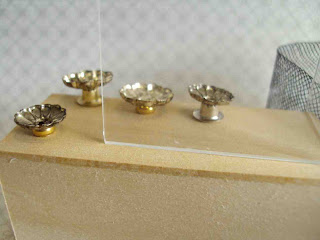 these are also crafting/scrapbooking items i picked out ages ago (you can tell by the rust LOL)...man it's hard to write about stuff when you name most things in your life 'thingamabobs' and 'whatchamacallits'. i need a thingamajig to help me sort out these names....heh heh heh. they're on uhm. eyelet things (eh? rivets? studs?) and jewellery findings that miniaturists seem to enjoy using as napkin rings. i bought them with that intention, however, my idea of fine dining is any establishment that provide cutlery, so you can imagine the standard of living i am accustomed to :P really? napkin rings?!? haha ouch don't hit me

since 1:24 isn't something i've really worked with, i don't have all that many accessories to use and will probably have to make stuff from scratch. let's hope they don't turn out too miserable XD 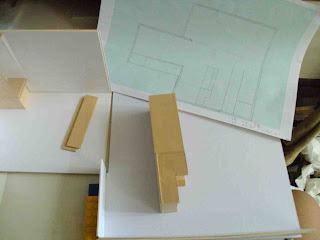 that leads up to a little more progress on the actual 'dollhouse' itself. what originally was to be a roombox has grown into a little display. i'm trying to keep it modular so it'll be easier to photograph and store. 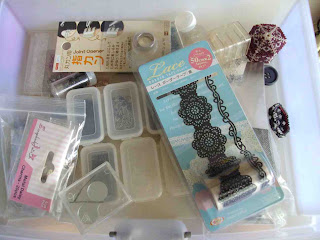 i've devoted an entire drawer *LONG DRAWN OUT DRAMATIC GASP*  to this project! (for those who don't know, i'm horrifically commitment-phobic, what, 6 years in a relationship is not too long before marriage!!!  ;P ;P ;P) haha kidding aside, it's really quite a nice feeling to get stuff i want to include in this project all in one place...additional lace sticker and beaded boxes are just so i can visualize a different contrast/colour scheme....i think i'll try to minimize on the black...kinda reminds me too much of halloween now that it's just around the corner...that...and i've decided on the main colour to use being.... 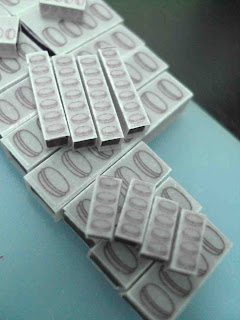 PURPURRRRRRRRRRRRRRRRRRRR! but this is for another post, cos it seems i only have time to work on challenge stuff over the weekend, so mondays will mostly be a double-post o.O

how's your challenge coming along? i wanna see and play along tooo~!
Posted by Unknown at 7:16 PM