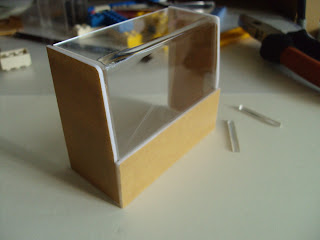 Not much progress on the 1:24 display, due to strained back/shoulder muscle. did however figure out how to bend acrylic sheets. this was meant to be another display unit (by now the stuff is falling in place right? figured out what it's gonna be yet? :P cos i haven't XD ), but the thinnest sheets I could get were touted to be 1mm thick, and in actuality it was more 1.5mm -_-" super bullet proof displays? o.O 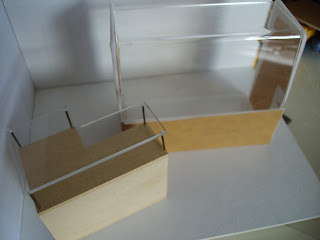 it wasn't that i miscalculated the measurements, but more cos i wasn't sure my little test on bending the sheets would work, hence i used a scrap piece of acrylic I had lying around. 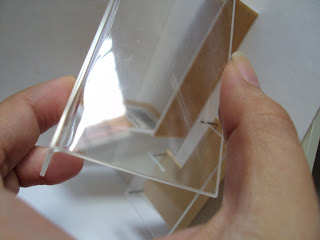 but since i had to remove the protective sheet in order to bend the acrylic sheet, i of course messed up while sanding the edges and got some scuff marks onto it :( acrylic is a right pain to work with in that it scratches all too easily :( 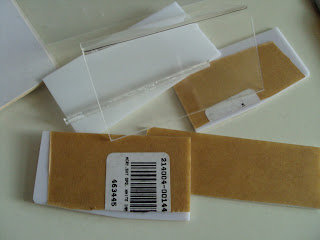 think this is a 'before' picture'?

NOPE. it's also cos i ran out of 'acrylic glue', which is actually either chloroform (which i highly doubt is what they sold me in art friends) or http://en.wikipedia.org/wiki/Dichloromethane....i used instead some superglue which is actually a cyanoacrylate adhesive, since i thought hey, it should get the acrylic pieces to 'weld' together, superglue rocks! the results seemed fine a few minutes into assembling it, however the joints were brittle and the whole thing literally fell apart this morning as i moved it around in order to take photos :(

i'll probably shop around for a better adhesive, the 'acrylic glue' stuff  is quite a *@#&$@#&*$ to work with, even with a syringe/needle it's very fiddly, and i have ruined a number of clear pieces when a drop (or more) of it fell where it shouldn't have 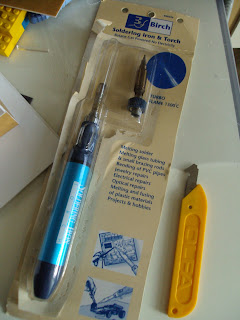 i used this soldering iron & torch, purchased many moons ago in order to learn how to solder (miserable miserable fails) since my regular corded ones were crap, i really like this one, it's a butane torch and up till yesterday i had no idea i could even use it as a hot air device XD serves me right for not RTFM ;P good thing i kept the packaging which had all the instructions on the back. again, got it at a local craft store, art friends. the OLFA blade on the right is the best one i've found for cutting the acrylic sheets, it's kinda tricky, so be sure to wear safety gear *guilty look* and read up online before you start :)

i managed to salvage the clear sheet by buffing it with my dremel and will probably flame polish it using the soldering torch, if i decide to go ahead with the modfiications to the original plan. will scrap this in place of a different design/dimension since it's clear it's too bulky for 1:24. maybe a smallish 1:12 display then. we'll see. :)

Meanwhile, Asuka has also posted about her progress on the challenge! do let me know if you're participating too! ^ ^