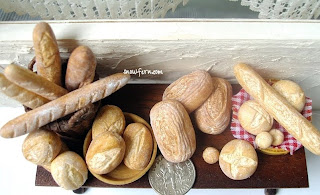 slightly overexposed, but i likes it!
i'm currently working on some prototypes, as stated in an earlier post (the unpainted breads). finally got round to painting them now that they're fully dried. i used acrylic paints, mixed up the colours as i went along since i don't really know what colours to use. i like this range, but when i showed them to my brother, he said they're too light. gee and i thought they were pretty dark already!

anyway. took the opportunity to take some more shots since there was beautiful light this afternoon after the rain. i welcome all and any constructive criticism, i'm really fearful of painting, so part of why this took so long was the procrastinating of picking up the brush!!! XD 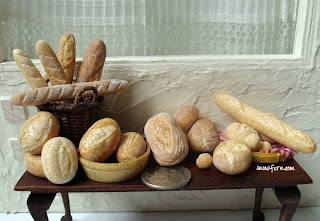 that's a lot of carbs. well, not really, but i do so miss eating breads T_T 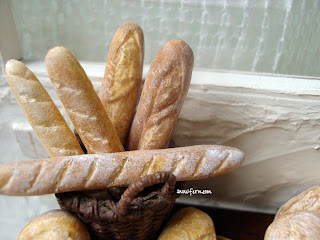 baguettes and stuff? i painted them 3 different hues, but i guess due to the light everything looks...lighter. sheesh. 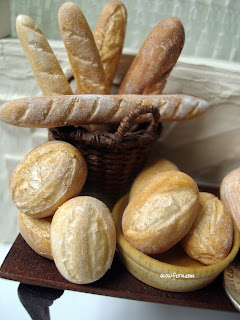 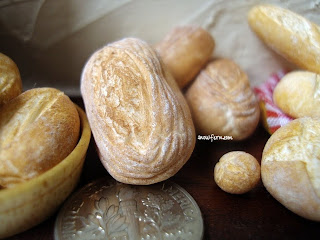 these were the ones i kinda majorly messed up after i tried baking them to speed up the drying process. haw haw haw. ANYWAY. 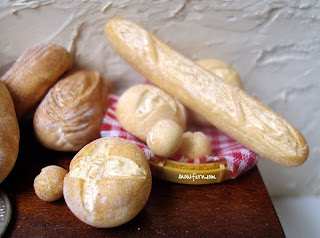 and the longest bread here, part of the lighter coloured range which is sorta what we see more frequently around singapore. it's a local adaptation of the french loaf, affectionately known in hokkien as "Jiam Tao Loti" (pointy head bread), but i grew up calling it 'roti pranchis' which i do not know what it translates into. funniest version i've heard was "neh neh pok" bread which is a ....children's term for "breasts" XD 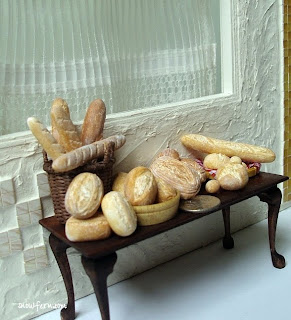 i think this pic is a little too 'cold' (too much blue) and will probably have to edit it but i like it still for ....what it is. whatever it is. heh :-/ 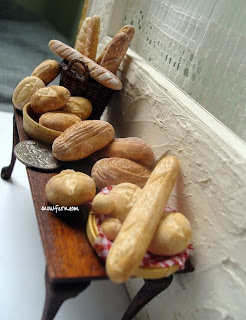 my fave shot of all. this was the most fun photoshoot i've had in a while, probably because i liked the light today (thank you Sun!) and cos i've finally gotten a whole BATCH of stuff completed instead of my usual itty bitty one-off pieces. LOOK SANS!!! I TRIED TO MAKE A SCENE!!! XD
Posted by Unknown at 2:41 PM