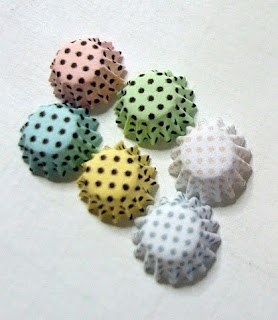 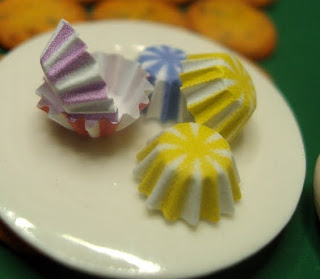 a repeat customer of mine requested some polka dotted and striped cupcake cases. i have a pretty old dinosaur of a printer, so this was the best i could do. 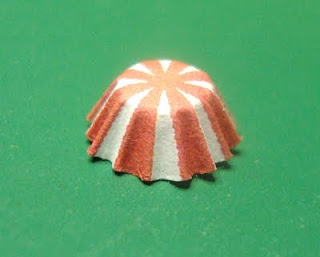 compare and contrast (again ha ha). this is my first attempt, and the edges were jagged. i use GIMP, a free photo-manipulation software (no way can i afford photoshop) and as with photo-taking, i'm kinda crappy at manipulating images. i think the latter attempts are pretty decent, just have to figure out a way to improve on the resolution (i used best quality photoprinting, but i guess i still need to get the correct papers :( ) 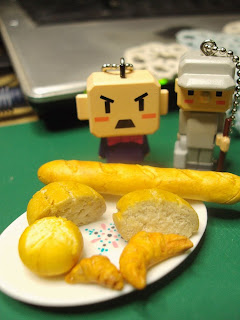 my youngest bro is so funny. he got these 2 keychains from a gachapon machine. you know those coin eaters that guzzle up your spare change in return for unbearably cute and useless items? yea i'm a HUUUUGE fan! XD well, he was out with his pals and all of them got various animals from the zookeeper series gachapon machine. so Ray wanted one too! but out of the 10 possible keychains, only 2 were humans, and after he failed on the first try to get an animal, he tried again, only to get the other human XD anyway he asked if i wanted them since they're minis, of COURSE i do XD 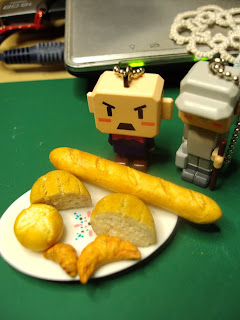 ha ha at this angle, that moustached man really does look hungry. i made some prototypes of various breads, but as you can see, the colour balance is more than a little off. it appears TOO yellow in these photos. they -are- a little more yellow than i'd like, but really, not as bad as pictured grr. really have to make another attempt at phototaking tomorrow. and yes, that's Petitplat aka Stephanie's plate again HA HA! i really should use some of the other plates. XD 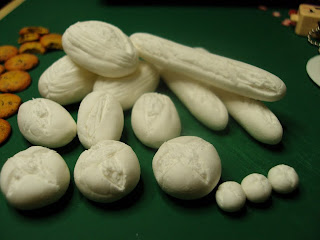 here's what i made this morning. i wanted to test out various shapes and intended to colour these with 3 different mediums, but in my rush to get them to dry, i stupidly popped them in the oven and they expanded and mis-shapened XD serves me right! ha ha! well i managed to squish them back into shape a little more, will do the colouring tomorrow when there's more light.

the cookies to the left of the breads aren't huge cookies in 1:12, they're 1:4 scaled. a commission that i got recently. i am rather pleased with them, so i'll take better pics of them tmrw lest they turn out all funky coloured AGAIN. and i'm planning a post on the different scales, and my observations on working at the different sizes. i've had feedback that it's confusing, but really, it's not! plenty of online resources on how to calculate it too ^ ^


yeah. i've been busy. busy is good! catch you folks around soon, sorry i'm not replying comments as frequently as i used to, but i do so appreciate them!
Posted by Unknown at 12:05 AM