EDIT: YAY I SUBMITTED IT! PHEW! asked if it was possible to submit this, and they said it was OK since it was mostly polymer clay ^ ^ wahhhh i'd better remember to RTFM more carefully in future T_T

back to the whiny stuff :X 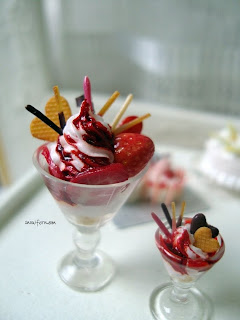 i am such an idiot. i did not read the rules BEFORE i made my entry for the semi-sweets group over in dA, they state specifically only POLYMER clay was to be used. somehow got it in my head that any medium could be used, and that the deadline would be 7th. but no, the deadline's 11th -_-" what's come over me? 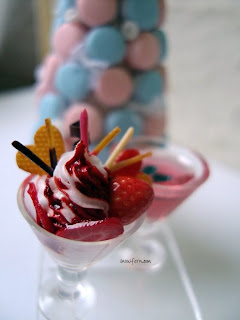 anyhow *sigh* i couldn't think of what to make so i asked bf what he would like. he said a parfait, with pocky sticks, wafer, strawberries and plenty of strawberry sauce. me, i think it looks like someone bled onto it. so maybe it was a good thing that i disqualified myself from the contest T_T 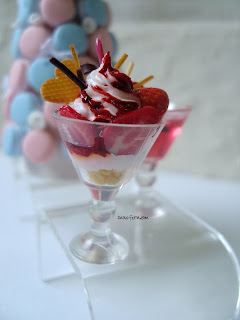 how i did -that- was, i made ALL the components, the cornflakes, the wafer, the pocky sticks, the strawberries, ALL from polymer clay, BUT!!!!! the 'icecream' was air dry clay! there's no way i can bake the clay in that parfait glass (or should i say, plastic?) which was one of the reasons why i opted for ADC. T_T here's how i did what, for the 1:6 version: 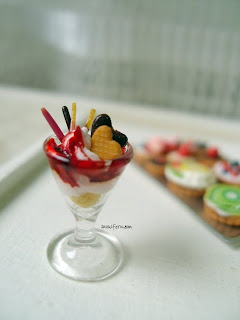 sigh. anyway. here's a 1:12  version. i guess i could have baked this one had i used PC, but i wasn't sure i'd achieve the peak (it's hard with PC as it's sticky and messy) and since i already had the ADC ready to be piped, might as well continue right? the cornflakes were so tiny LOL i guess i could have shredded up some paper but i really really wanted to challenge myself. or make myself go blind. whatever. i'm sure Yotsuba would enjoy this. looks so bloody, i really gotta find a better way to make the 'sauce'. maybe i'll just dig out everything and re-do it. ha ha. *grim faced* 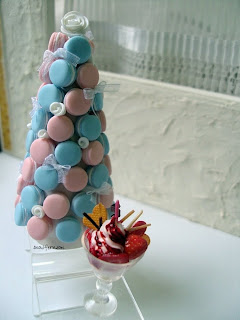 this is the 1:6 tower i did for a customer. originally, she brought me a pic of Betsy's tower for reference, but i didn't want to 'copy' her works. my customer then said i could interpret it my own way, since i had already made 2 other towers for her and she just wanted a 3rd, different than the first two. i struggled over how differently i could build the macaron tower, so i switched up some elements to complement my customer's colour requirements.made the macaron shells and molds for them myself. had to, or i'd die making the individual shells XD

i don't particularly enjoy making the towers, they are sooo intensive (that's more than 60 macarons on that tower i think, so over 120 macaron shells, i lost count, excluding the batch of 100 shells i accidentally burnt T_T). maybe it's easy to some people, but any form of repetitive work just slays my hands. prob why i tend to mix up my designs and try to minimize batch work.

for those who are keen on making one of their own, Betsy does have tutorials available on her etsy :) i do so admire Betsy's works and contributions to the mini community, probably why i struggled so hard with rejecting/accepting/re-rejecting/re-accepting this commission. it's hard for me to say no to someone who has supported me right from the beginning, encouraging me to explore and invent myself, purchasing my works and commissioning me for more. this is the first time i'd run across this issue. i wish i could divulge more, or that i could have handled this better, but i feel i've already said more than i should :(

maybe i should just charge higher, so they would go straight to the original artist rather than me XD i really would hate to think of my rates as 'cheap'! *angry look* i put a LOT of work and time into making these!!! grrr. hell i've already reduced greatly my commission slots, maybe i'll give it up altogether, i'm so angry.

anyway. on to happier stuff. 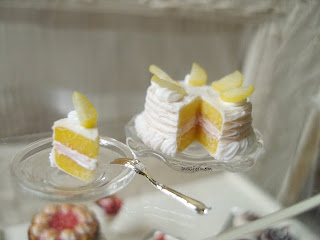 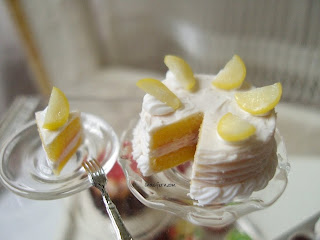 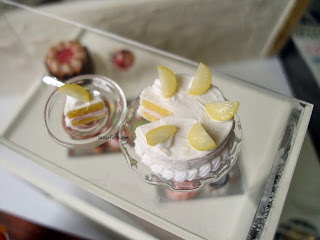 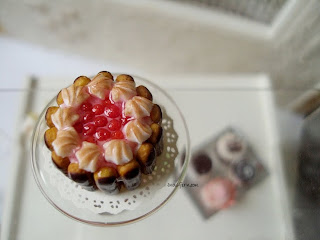 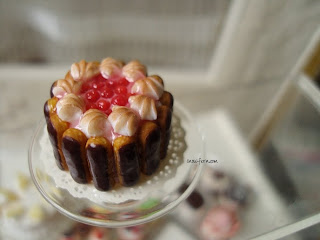 requests from a different customer :) sorry about the eariler angsty outburst. ha ha. these cakes make me much happier cos i had more room to work with, creativity-wise. the raspberry/eclair cake was something i did a long time ago, this is probably the 3rd one i've made so far. i changed the eclair mold though, not that anyone would notice but heck, i do! took this around 5pm, losing sunlight....gahhhh 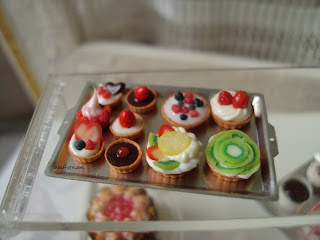 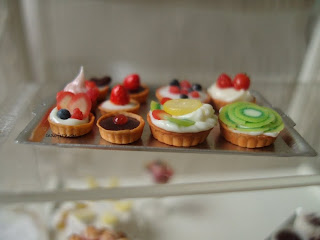 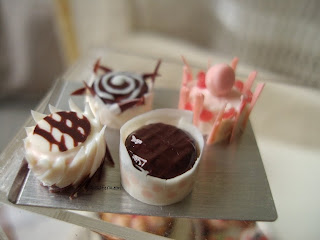 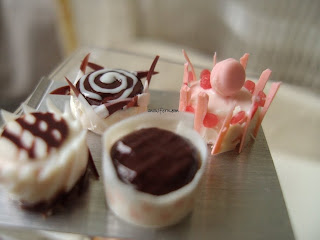 had a burst of creative energy, after being utterly frustrated by the macaron fiasco. funny, that i only made 1 macaron in 1:12 XD here it is, on my 1:12 mini cake! i know they're oddly designed, but i'm experimenting with different techniques. i think my fave is the one foremost, with the polka dots. i would so eat that. :P these are going into my personal collection, i love them so much :D the cake bases, are the burnt macarons XD XD XD woot woot recycling!

so i didn't win theminifoodblog contest, but i had so much fun making my entry, and pushing new boundaries, so thank you all for your support and votes! i am so happy that other than my bf, his 2 friends and my 2 brothers and 2 friends who voted, i got far more than the expected 10 votes XD (no i didn't vote for myself i'm not -that- narcissistic! ha ha bf says i'll make a crappy politician wuh?) i am looking around for more contests to participate in, oh crap i forgot about the other one that i failed XD better get to work on that, i don't even have an idea yet T_T

thanks for reading. or just looking at the pics. :)
Posted by Unknown at 10:20 PM