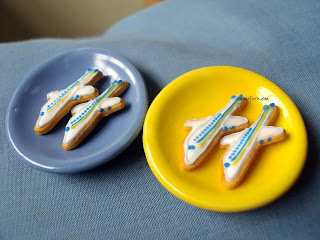 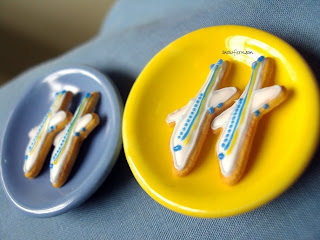 Ben turned 30 today, and i wanted to make him something he'd suggested ever since i started making minis. he originally wanted mini aeroplanes, but i didn't know if i could make them (back then) and so i tried to make some this year...but since i 'specialize' more in foods, i decided to make plane(plain?) cookies. 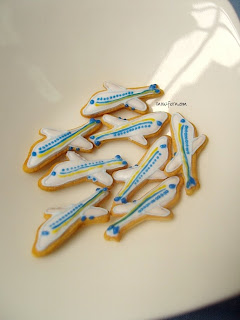 these 8 were all i could manage with my horrifically aching shoulder. it's not as bad as last sunday, at least i can turn my head now XD they're larger than what i'm used to, each approx. 2.2cm long, i can't pipe any smaller i think. well i know i'll challenge myself some day....cos i'm crazy like that. :P

here's how i did it, roughly...NOT A TUTORIAL so view at your own peril :P 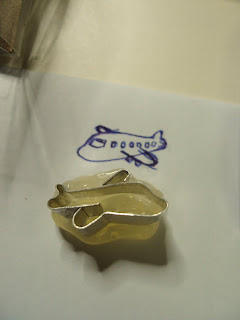 starts with a sketch. that's my lame rendition of a what-i-thought-would-be-a-cute-plane. it's surprisingly difficult to find nice pictures of aeroplane cookies that resemble my brother's company's planes ?!?! i thought there'd be plenty but...uh.......:-/

i then used an aluminum sheet, approx. 0.5mm thickness, available at craft stores (got mine from art friends' bras basah). using a pair of garden shears (make sure whatever tools you use are suitable, and use gloves, these can be real sharp), i cut out strips of metal approx 1cm wide and bent them with pliers using the sketch as a guide. you can probably use base of disposable pie tins folded in half if you wish, that's what i used for my eclair tutorial. i then used a hot glue gun to hold it all together, and also as a safety thingamabob. forgot why i even have aluminum sheets, i think i stupidly tried to solder them (hahaha yea i know better now) 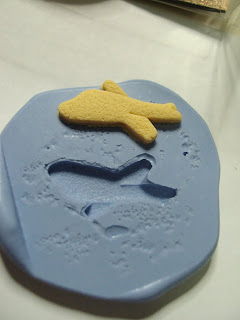 i guess i could have simply MADE the prototype instead of going through all that cutter trouble, but i'm not so good with the defined edges. anyway, i cut out a shape, and modified it a little (mostly the tail bit), textured it with my toothbrush then used alley goop to make a mold. i was in a bit of a hurry, hence the poorly made mold XD bah i don't care. i was gonna pipe over it anyway :P don't you think it looks like an anchovy? well i do! 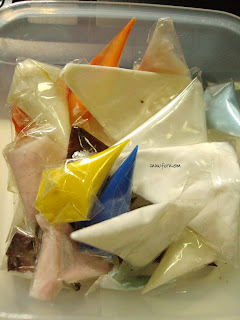 since this is not a tutorial, i don't care too much about showing how to mix up the piping 'cream' and stuff. made mini piping bags (you can probably go search how to make them and just make mini versions) and filled it with the polymer clay + liquid polymer clay mix, and piped away like crazy. yellow and blue are his company's colours, the rest are leftovers from my tonnes of piping (failed + successful) attempts :P 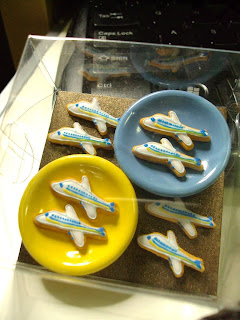 packed away and now in my brother's safekeeping :) those planes are glued onto the plates, with mounting tape at the back (i can't believe how expensive a roll of mounting tape is, ~SGD$6 for a small roll!?!??!) cos i couldn't get the magnets in time. the other 4 are blu-tack'd onto the cardstock.

OK I AM NOT SORRY ABOUT THE GROUCHY TONE COS YOU KNOW WHAT I'M LIKE OR SHOULD KNOW BY NOW :P this is to deter people from asking me questions that i've answered over and over again, my advice is, JUST TRY IT. what better way to learn than through experience i always say!