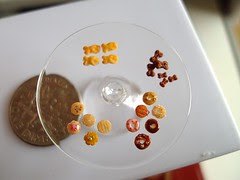 she actually just wanted doggie biscuits, so i made some, but got bitten by the idea of making more quarter scale items (when i work i tend to work in batches and spurts) so i got round to the goldfish crackers that i wanted to make aeons ago....which led to some cookies cos i thought my old ones were disastrous..which led to the donuts cos i had leftover 'frosting' and didn't know what to do LOL!

they are all now ready to be mailed early tomorrow morning ;)

oh! and i am trying to clear some stock cos i intend to work on smaller scales and less complicated stuff. this is because i want to start on a competition project (cdhm.org is holding one!) and i wish to clear some space or i'd just feel unsettled. PLUS bf bought me a whole buncha stuff and i need the space! as i've mentioned before, who knew minis could take up so much space UGHHHH

going to clear the table now, and sort out the new stuff ;) more pics later!