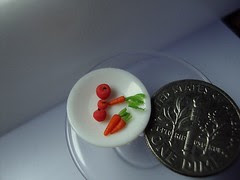 i have to finish up some items, these are just the first few of those, i have the rest (and then some!) in the oven baking now....

i prefer the carrits with the full greens, however i think they would be too fragile to travel :( the apples require a little more work, so in the oven are a different batch, a nicer batch (i hope!)

quarterscale items are really fun to work with, mostly because of the challenges they pose. well obviously, they're sooooo tiny. dropping them usually means my heart skips a beat, since picking them up would be difficult, that is, if i can even find them to begin with.

also, keeping the lint out. ah. what a pain in the tush. a piece of lint = almost half the item LOL. and colouration. please don't tell me i have to catch a fly in order to use the hair on its back to paint these items > < i specially bought a brush to work such details, it says it's made from 100% weasel hair (??) and it's pretty good to work with so far.

ok. that's about it for now. weather's messing up my sinuses, had a coupla asthma attacks recently, am feeling poorly, did as much as i could, time to get some rest.