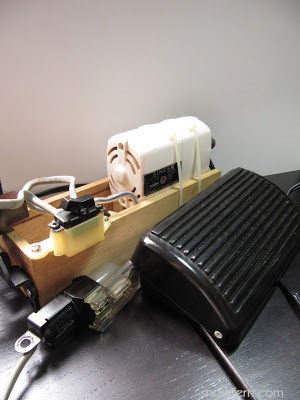 This used to be my mother's Singer sewing machine. I spent most of last evening sitting on the floor, screwdriver in hand, dismantling it for parts. You can see how it used to look like here:

(sorry, don't know how to embed photos from instagram! don't think i can..........:( ) most of the plastic gears had broken, and i figured, it's cheaper to just get a new sewing machine (which i did) than get replacement parts. so i snuck it out of mom's room and took it apart hyukhyuk. 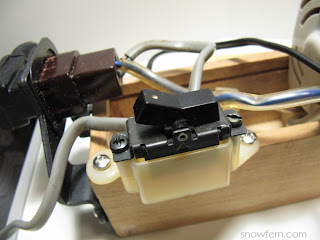 Rather than muck about with the connections, decided it would be best to keep everything 'as is'. here's the switch..... 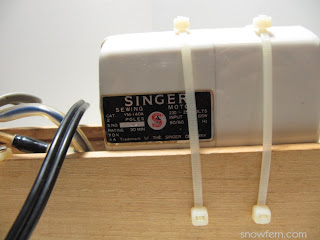 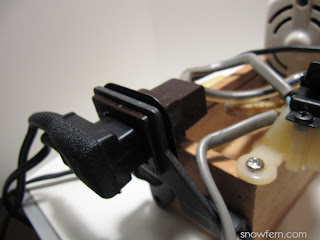 actually, the light was even kept (you can see it in the first photo)....there's even a short video clip of it in action after the first part of it was put together: 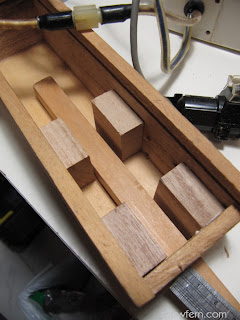 The whole contraption was put together in a cheap wooden box that used to be my 'mini' woodworking worktop. the width just so happened to be perfect for the motor! ^ ^ The motor casing has wires sticking out of it at the base, so the four blocks were used to 'lift' it so it rests parallel to the table. 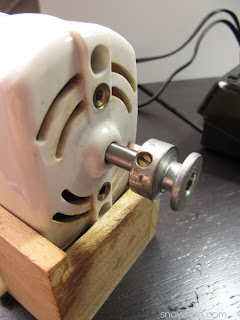 Here's the shaft thingy. I have no idea what everything is called, and struggled to find suitable parts on ebay :( Can anyone help with suggestions? I know the shaft is 1/4" and so I should get like maybe a socket with a 1/4" drive, but the collet that I use for my dremel doesn't (and won't) work since that plug thingy (the one with that small screw to hold it in place). It's smooth on the inside, no threads so there's no way for me to secure any other parts to it either.... 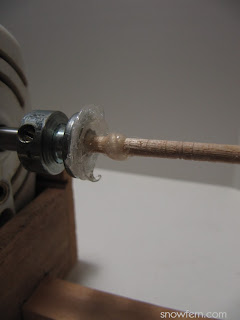 ....instead i used my hot glue gun to try and hold the rod in place....it kinda sorta worked but since there's no way of placing the rod dead centre my initial turnings were kinda wonky T-T

The idea is not mine at all! I had been looking for an affordable lathe for a beginner, and since I have no intention of becoming a woodturner it seemed quite a costly investment (USD$500 after shipping!? might as well get a Unimat, though am not sure i'm ready for that either). So a quick search on Google threw up quite a number of DIY ideas, the one I especially liked was by Youtube user Kula Moku (pyroneph)

TBH, I think it was his old craft blog with how-to on making molds from silicon sealants that led me to his videos and I tucked the idea at the back of my mind. He has all sorts of cool videos on DIY and How-Tos, check out the one where he converts a coke glass bottle into a drinking glass! yow! makes me nervous thinking i'd have to drink from it, but the technique is cool!

here's the video where he shows how to put everything together.

Also, back then when I was researching lathes and drill presses, the room setup didn't quite allow for more machines. Not that it does now, which is why I'm glad this contraption is so compact it fits in a Daiso shoebox WOOT WOOT 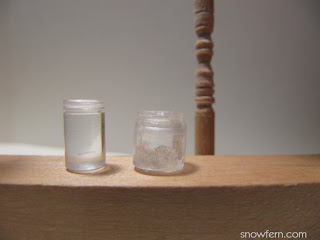 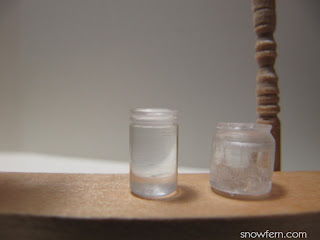 So after initial playing around using acrylic rods (from Art Friend), it became evident that a better way to secure the rods that were larger than the hole was necessary. that, and finding the centre :( short of rushing down to the DIY store, which I also highly doubt would carry what I need, decided to go ahead and add the last part, the uhm, forgot the name. dead centre? anchor? 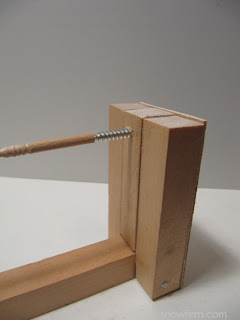 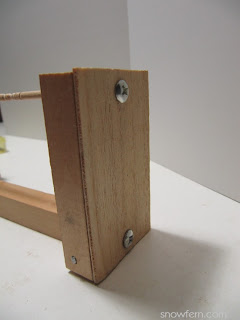 uhm. this part. found a 1.5cm square length of wood in the storeroom, glued, screwed and nailed this part together. the bottom length is adjustable and was clamped down as i worked on that teeny 4mm diameter dowel. 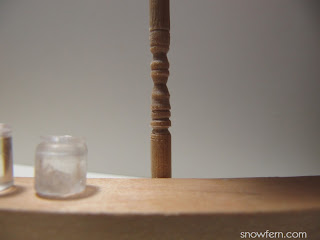 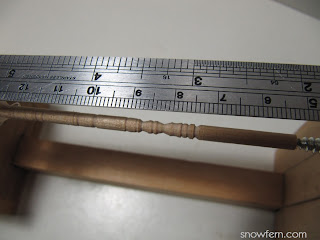 the results were MUCH MUCH better just with that holding the end down, which makes me think maybe i needn't worry that much about finding an accurate centre, this isn't precision work after all. but it's still very irritating having to pluck out the dried hot glue stuff each time i change the rod. grr. 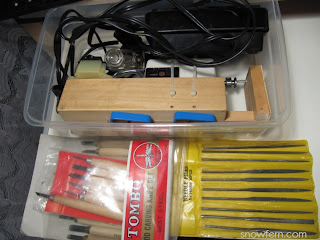 as for the carving tools, am still learning how to hold it against the turned item, and i think the next thing to learn is how to sharpen them :-/ as you can see, everything fits neatly into a shoebox ^ ^

i hope to have better results tomorrow, will see if i can turn like, a bowl or plate or summat. WISH ME LUCK!

p.s. no animals or Cindys were hurt in the process :D
Posted by Unknown at 1:25 AM