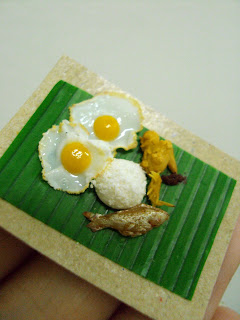 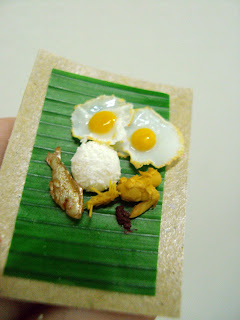 Nasi Lemak in 1:12, done during a lesson with beginner student (partly demonstrated by me)....i don't feel comfortable saying it's done entirely by her (she insisted the fish was mostly done by me LOL we were running out of time and I had to show her!)

was a little too ambitious in trying to squeeze these many items into a 2-hr lesson, especially to someone who's totally new to miniature-making and clay! this was done in air dry clay, which is something i often recommend to newcomers, mostly because there's lesser investment than polymer clay....i think we did pretty well :) She was really fun to teach, and very understanding about my situation. 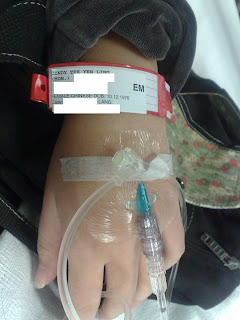 I had fallen ill with food poisoning the night before, i thought i'd shaken it but midway through the lesson i had to go uhhh toss my cookies again :( i was so sick that i couldn't make it to the clinic until thursday (the lesson was on last tues night), and by saturday i was still puking my guts out (that's just the least of it :X :X :X ), in fact i think i'd even reacted badly to the antibiotics -_-" dad 'kidnapped' me to the hospital for treatment despite my protests (and tears, yes, i hate going to hospitals THAT MUCH), doc wanted to ward me but i insisted on getting out, so she said ok, 2 hr observation after medication and re-hydration....so that's my umpteenth drip in this lifetime. the backs of my hands are practically freckled with drip scars i'm so sick of hospitals AUGH!! curse this weak stomach and constitution.

so that was last week. i'm MUCH better now, although a little lonesome cos bf had to go in this week for reservist training. that joker told me he was so relieved, and applauded my dad's tactics in getting me treated -_-" he said at least he knew i'm being cared for while he's away...i suppose this episode has taught me that............


ER docs have a great sense of humour.

and i must have, too, since i'm grinning at the recollection of it all.

so back to miniatures. where's that CNY post I promised eh!??!?! 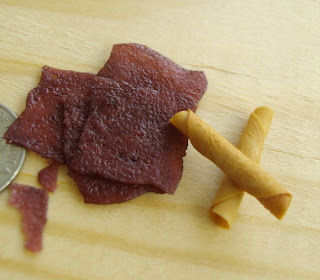 1:6 prototypes of bak kwa (a type of sweet pork jerky we have here, very super popular during chinese new year) and nonya love letters. i think i'll try and roll up the love letters a little tighter for the actual item. plan to make a set for bf's mom..... 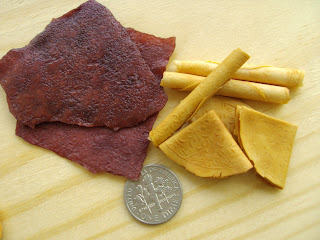 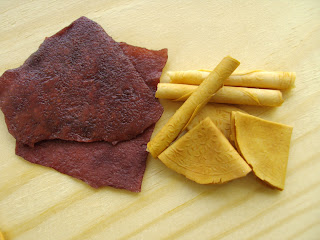 these twice as large, 1:3.....i have some other goodies in mind (and in progress, molds have been made but no time no time!) but judging from my to-do list and last week's shenanigans, i don't think i have time to make more :( ah well. maybe if there's a CNY doll gathering i'll bring them along..... 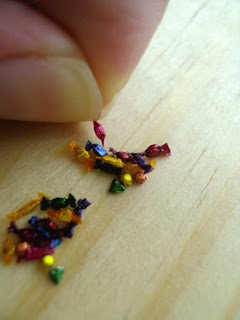 there's been a lot of differently scaled items i have been working on, mainly this 1:24 commission that came in early last week. i only have 1 item in the list left to complete, but since my hands cramped up rather badly since i had to use tweezers to wrap these teeny tinies, i decided to take a break and update this blog. 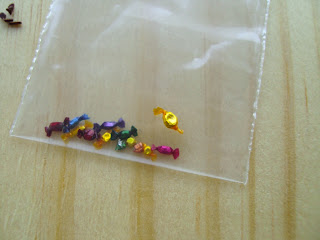 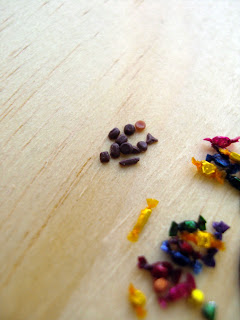 yes, they're detailed on the inside too. approx 1.5mm-2mm (excluding the long one, of course). which is your fave?? i like the strawberry cream one BEST. i remember picking through each container to get just the red cellophane wrapped strawberry dreams MM MMMM they were the only ones i liked really. no no, i'm not a picky eater, i also like the long toffee centred one when i've finished up the strawberry dreams :P 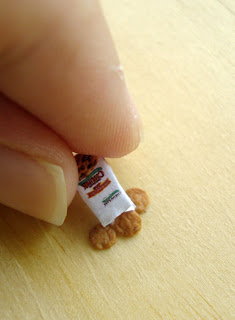 more choc chip cookies, this time i coloured it to match the cookies on the packaging, though not as picture perfect, i mean c'mon, the cookies i buy seldom ever look as promised on the package!!! 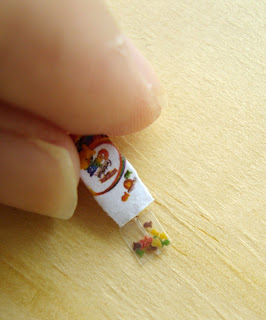 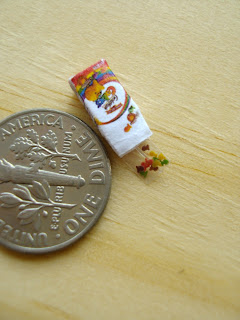 when the request came in for these 1:24 items, i thought to myself....geee.....really?? can i do it? i'd already struggled with the 1:12 versions.....and the 1:24 ones would be what, 1mm long!!!! but you know what, i'd already prepared the packagings for my 1:24 roombox, so i decided to accept the challenge. they were so tiny i packed them up for easier manipulation. 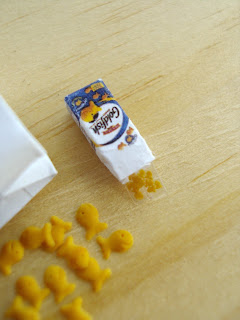 just for fun, i took photos of these with 1:6 versions :) 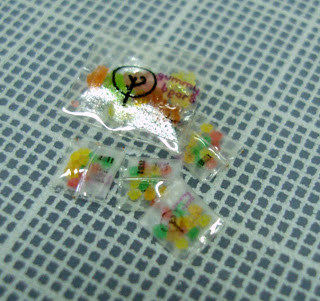 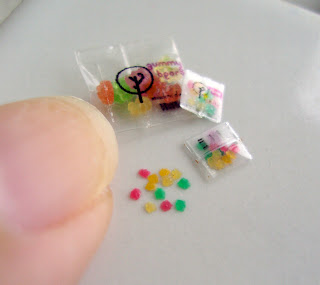 they're made out of polymer clay, unlike my 1:12 versions (which were made out of epoxy resin) shown here for scale..to be honest i freaked out a little making these, firstly they're so tiny and since my magnifying glass is at home (it's a bulky heavy workstation by Tamiya) i made the mold/master entirely by intuition. i mean really, there's no point me squinting and giving myself a headache since i can't see it anyway no matter how i tried. luckily they turned out reasonably gummy-bear shaped (i think!). the green was left intentionally as is, i thought about mixing it a little lighter, but at 1:24....i figured the colours could stand being a little bolder.

wow you're still reading? thanks! i always try and ramble less, but i'm bored and forcing myself to relax the hands so i can continue working later..... 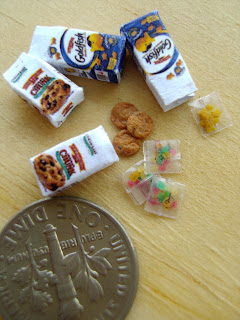 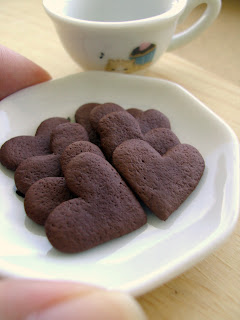 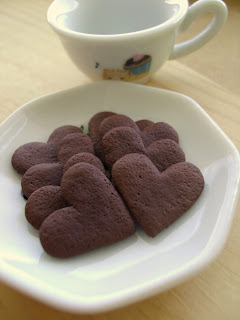 part of an older commission 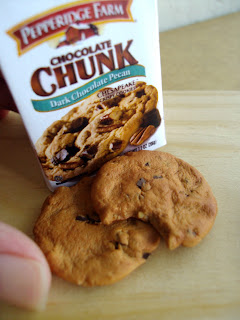 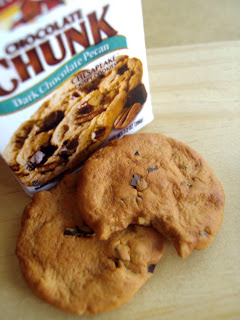 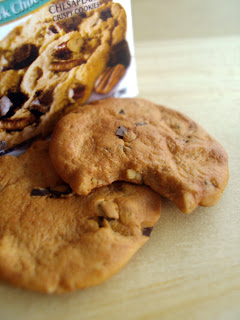 a more recent request, in 1:3. people seem to like the cookies huh! making me crave for some zzzzzz 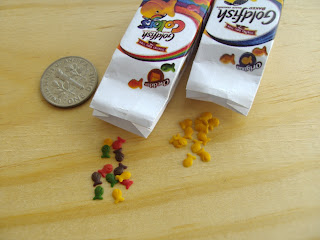 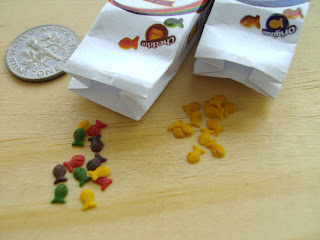 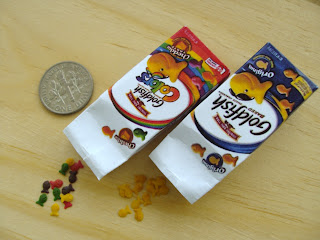 aaaaand, another request (2 actually) for 1:6 aka playscale (Barbie, Blythe, Pullip, YoSD) Goldfish Crackers. might list these if there's any demand. oh and the shapes are new and the smiles individually put on :) my newer 1:12 versions will be a similar shape, there's only 1 left of the older design in my Etsy, if anyone's interested. The newer version will cost more, since they are more laborious to make and come with (in?) laser printed packaging.

ok i think that's it for now. there'll be more updates and items added to my Etsy hopefully by next week.