Stuff I found whilst packing 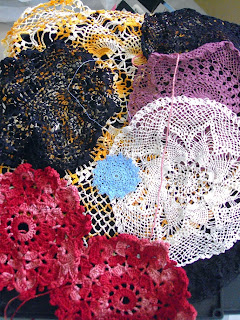 since bf bought me a vacuum cleaner, i'd been cleaning up my room with a tad more fervour. i pulled open drawers and gave their contents a good dusting down. first up, the crochet'd doilies i never got round to finish tucking in the ends XD would have to also find a day and time to tack them down to neaten them up, but i find that a rather tedious process. i made these when i was sicker than usual 2 mths back, all i could do then was lie in bed and my hands were itchy! most of the designs are the same, just in different sizes and threads.

i have no idea what i meant for them to be. some could be used to dress up mini tables and sofas, but i think the main purpose of making them was just so i could feel as if i were being productive :-/ they're now filed away in a plastic folder until i re-discover them during spring cleaning sometime in the future (not too far ahead i hope, i don't clean enough as it is :P ) 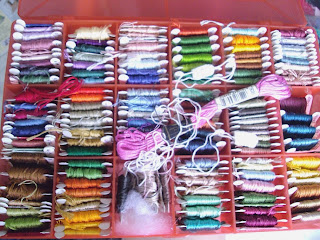 and then...there's this! my trusty box full of DMC threads. i started cross stitching as a child, and so have amassed quite a collection of threads. i have another 2-3 ziploc bags full of thread, these are just colours prepared for various projects. i am prone to organizing my collections, i also have 2 CD boxes full of music CDs which i've taken out of their jewel boxes, putting them into individually labelled sleeves. each box contains about 50-60 discs...i find the process rather calming. i think i'm a control freak in denial LOL. actually i think i did it because those darn jewel cases are heavy and we moved around quite a bit back then. 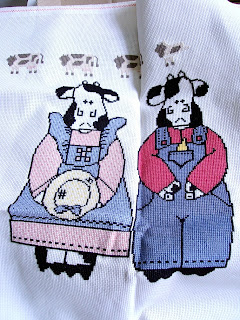 here's an unfinished project. i think i got tired of sewing the same cows (re: border) over and over again. i planned to turn it into a bag, i liked how the cows are somewhat of a parody of the american gothic painting. maybe i'll convert it into a cushion cover, ionos. maybe, maybe....LOL! 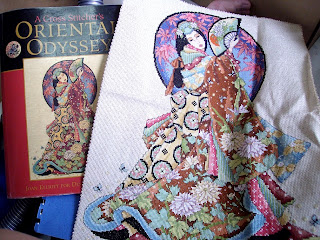 my most ambitious and fave project! i fell deep in love with this and bought the book on the spot. this was originally framed in a glass only 'frame' from ikea, but it fell off the wall and so went back into my craft drawer :( 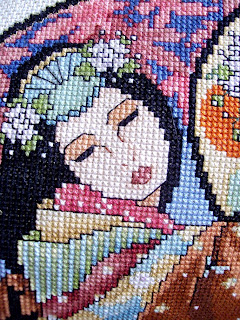 closeup of individual stitches. i don't remember the stitch count of the canvas, but i know it's rather small. 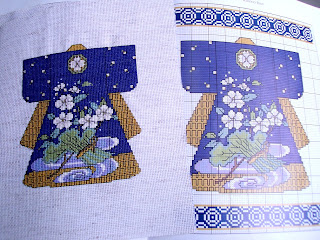 and then the kimonos! i love these, i remember trying to decide if i wanted to do the border, i guess i chose not to XD 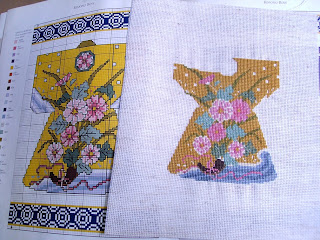 and some incomplete ones. i don't remember why they remained incomplete, i hope it's not because i ran out of thread, but judging from the progress of this, it probably is the reason :( don't you hate it when that happens?!?! 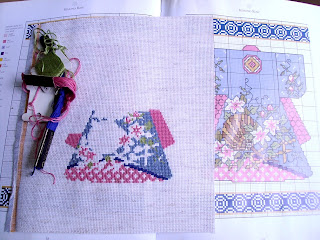 i found this piece tucked away, with the threads, in the book. i don't use hoops, i find them a bit cumbersome, i simply roll up the canvas and hold it gently in my left hand, thus retaining the canvas' natural shape (somewhat, i hate it when the hoops leave marks or stretches out the canvas). so far, upon inspecting these, i don't see any sweat stains and i must have kept these for over 6 years? it's somewhat surprising to me as i have sweaty palms :P 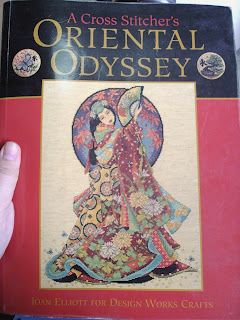 here's the title of the book for those who are interested. i highly recommend it, there are quite a number of designs in there that i adore which might be suitable for miniature projects! in fact, it's tempting me to pick up x-stitch again, more so after being a recipient of one of Rosanna's wonderful works. 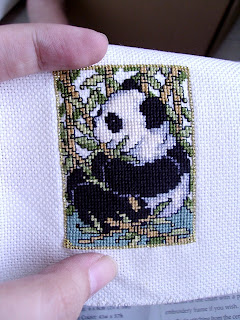 i remember how much i loved this design that i made it such that it would fit into my wallet. however, my compulsions seem to only work on completing the designs, but not the finishings nor presentations zzzzzzzz -_-". so back into the book it went after taking this pic. ack *sheepish*
i have so many more finished and unfinished x-stitch projects. i remember filing them into pocket folders, i just gotta find it.....now that i'm blogging about them i feel as if i really should at least complete the incompletes before i embark upon mini x-stitch. gahhhh *grits teeth* 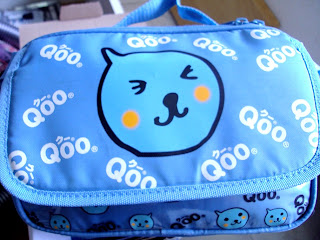 on to the non-craft stuff i found! here's a Qoo bag. i used to drink the white grape flavour quite a bit. i vaguely recall queueing up in order to exchange/purchase these with my friend, we even got ourselves the Qoo bikini. i don't recall what we had to exchange for these though, probably some Qoo tabs + cash.....man that seemed like a lifetime ago. there's a whole bunch of soft-toy stuffing bursting to get out of the bag now :P 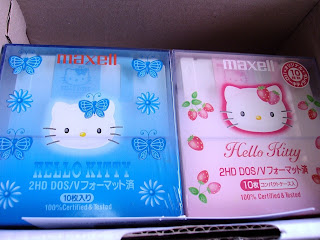 i vaguely recall a friend giving these to me. on the back, it says for distribution in Japan only. i don't even remember how she got it, or why. back then, i wasn't even a fan of Hello Kitty, not that i am now. although i admit i find Hello Kitty products rather cute NOW. funny how i've regressed XD 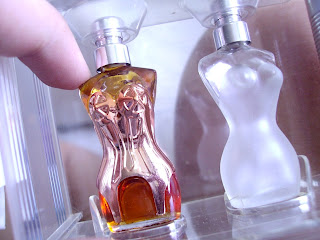 wakakkaa! remember the days when Jean Paul Gaultier was soooooo fashionable!?!? is my age showing??? i love love love this bottle. i think either my aunt or cousin gave this set to me....so far i've only used one bottle (the empty one on the right). 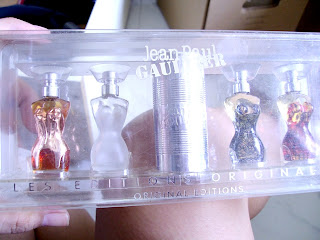 i don't use any perfume anymore, but in my late teens, i used Escape, Eternity, Versace's Blue Jeans and Red Jeans....but my all time favourite was Davidoff's Cool Water for men! wahaha i wore alot of that! i think my 2nd fave was Drakkar Noir, but only on the men (boys?) i dated then tee hee....do they even sell these scents anymore? although i do not recall many of these scents, there is one that i hope to find again. Yardley's "Pink Lace". but i think even that is out of production. heck, i doubt i'd even like it anymore, but scents are closely tied to memories, and now that i'm all feeling nostalgic i'm missing the scents!

ok that's it for a peek into my dusty storage drawers. there's of course a tonne more stuff, like Burda magazines and knitting magazines that i used to collect, as well as my yarn stash and dozens of knitting needles, but that's another post for another day :) hope you enjoyed reminiscing along with me!
Posted by Unknown at 4:40 PM