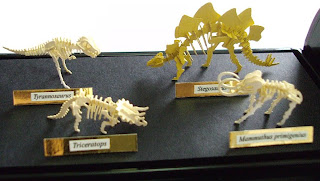 i first came across these via Susanna's blog, and fell hard for them.... 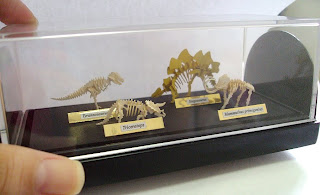 the largest of the four, the Stegosaurus, is barely as long as my thumb! i don't know what scale this is, but i didn't care. i bought them as kits, and made some signs to go with it...it was meant as a gift for my bf, in celebration of....actually i don't know. a whimsical purchase? XD anyway, i finally finally had time to complete it! i know the signages could have been better made, but i really wanted to cheer up bf with it, and i knew he wouldn't even notice if i made them any nicer anyway XD

you can find the kits at the following links. they're from the same seller, just different venues. 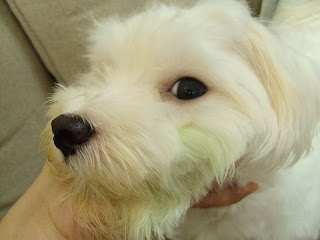 so....this little mischief started turning green, no it's not cos i haven't washed her (she got her shower on Monday!)...more due to the new floss/chew toy i got her ewwwww 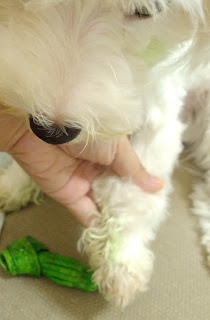 see the culprit? and eww even her paws turned green but it's not so obvious in this pic i guess.

i'm alot better now, recovering from a nasty bout of gastric flu. tum's still wonky, but at least i'm no longer shuffling in and out of the toilet :every hour or so. also, brother passed me the data cable, i'm getting all the pics out of the handphone now!!!! woot woot! and even better yet, i got some exciting news from my cousin, but i can only share that much later....ahhhh!!!! i'm excited i'm excited, could you tell?

man my posts on this blog are so mood-swingy. GET A GRIP, CINDY! XD

next post will probably be a mish-mesh of the size/scale thing, and some pics off my handphone. i'm still trying to sort stuff out, i'm feeling extremely overwhelmed! over NOTHING! HA!