another peek at my 'roombox' 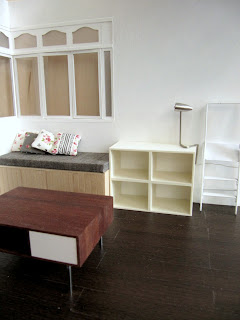 very little progress, and i'm waiting on some lights/dollhouse wire to arrive (spent the last of my PP credits on them, :X) before I can proceed further. this is what i have completed so far:

- one (and a quarter) wall primed and painted. i used book board (??) for the walls, cos it was relatively cheap, and could cut it with a penknife. a saw worked better for it, but that also meant alot of sanding (and dust) involved, so i tried to keep sawing to a minimum. well, that and this stupid shoulder ugh.

- windows were made out of approx 1mm thick paper (cardstock?) and some 0.25mm plastic sheets. the frosted bits were just anti-cat-scratch film stuck on the plastic. i plan to work on the exterior too, maybe some climbing ivy, a few potted plants...a pond? am i getting too ambitious? XD

-  floor was simply vinyl faux wood sticker, stuck on black A4 paper which was first stuck on a piece of 1mm thick paper (cardstock?!? ionos what it's called) it's not permanent cos i would like to play around with this area :)

- window seat (??) ok, i'm such a failure at all the designy terms and names blegh. anyway i made it out of basswood pieces, the 'cushion' part out of foamcore and fabric. cushions were made sometime ago, and i think the colour scheme works! the doors at the base are working doors, i haven't yet varnished it cos i wasn't sure if i wanted to paint it white. looking at the photo, i think i'll keep the original colour (which will darken a shade after varnishing...hrm.....*scrunches face*)

overall, i don't think there is a 'theme' to the room, but it's slowly working out i think! :D i didn't start this with a sketch or anything, just made things on-the-fly and  hoped that the stuff i have collected so far would fit in it XD so far so good!!! i want to make a 'proper' sofa in the same fabric, and maybe a bookshelf, a coffee/side table....ionos, let's see if the painkillers don't knock me out first!