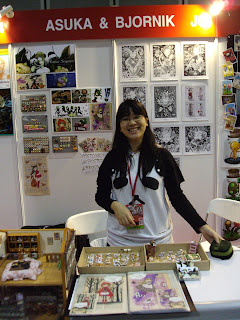 HI ASUKA! XD there's Asuka in her fave panda sweater, at her booth. this year, she's back at STGCC with  Bjornik (HI BJORNIK!) who was her booth partner for STGCC 2009 ^ ^ 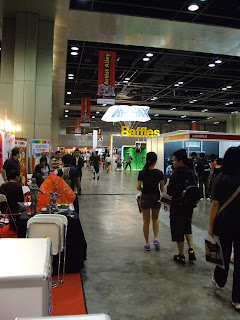 if you squint a little, you can prolly see the "Artist Alley" flag :P this year, the alley didn't consist of booths, and  visitors were led directly to the alley via the entrance to the event. i like the layout better as it meant (somewhat) better exposure for the artists :) i thoroughly approve!  :P 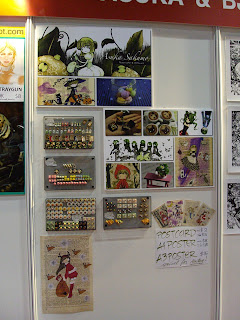 some of Asuka's print works for sale, as well as her minis! if somehow you missed out you can always contact Asuka via her blog: http://asukas.blogspot.com to check on the availability of the prints/postcards. i know a few of the A4 sized posters sold out yesterday, WHEE!! 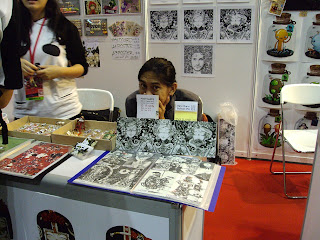 aaaand there's Bjornik hiding tee hee. i love his artworks, they're soooooo intricate! see more at bjornik.com. he's based in the Philippines so try and make it to STGCC for the final day today (12th Dec)! tickets are available at the 1st floor of Suntec convention centre for i think $15 (one day pass). ionos cos i got an exhibitor badge for entry :P 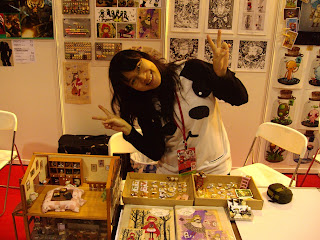 wakakaka we had so much fun yesterday! this was before all the activity started, so Asuka's still in a bouncy flouncy mood, as you can see...;)

i didn't really walk around all that much, but i did go up and down the Artist Alley alot since it was the path to the loo (heh) so i took time out to take pics of the booths..i tried to take pics of all of them but some were simply too crowded to take a 'proper' pic...i totally forgot to snap the stage area or the (strange) library area where you were allowed to borrow books at the venue itself (!????!!!!) was recovering from a bout of food poisoning (on friday) and the flu earlier in the week, so the day started off somewhat strange and slow for me. highlights for me were: 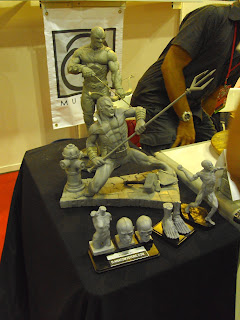 Mufizal - http://mufizal.deviantart.com/
his work is awesome! he happened to be the only one demonstrating sculpts at the alley (some artists were offering sketches) and thus i naturally drifted towards his 'studio' XD very happy to share his experiences and techniques, as well as materials etc, i kept bugging and 'stalking' him when my help wasn't required at Asuka's booth XD it turns out (much later in the day) that we had a mutual friend! the world is sooo small :D i believe he does mostly commission sculpts, he was demonstrating sculpting on a Gouken figure.....i think this was my 2nd fave booth in the alley (1st being Asuka's, of course hee hee!) 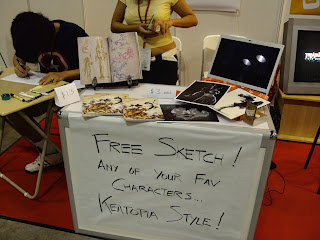 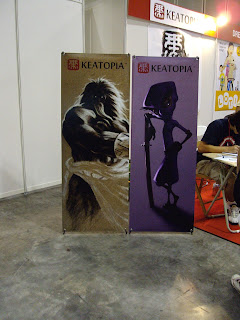 Ean Keat Ong - http://keatopia.deviantart.com/
my next fave has to be this guy, his name (rather, Keatopia) seemed so familiar! I had thought he was at previous STGCC or AFA, but he said it's his first time exhibiting :O anyhoo, i really <3 ninjas and was more than pleased when he autographed my copy of his 'sketchbook' (available for $13 each) with a ninja without me prompting him to :P boy this guy was busy the whole day, each time i passed his booth, he was busy sketching up a storm. his arm must be right sore.....to think he has to go through the same thing today XD 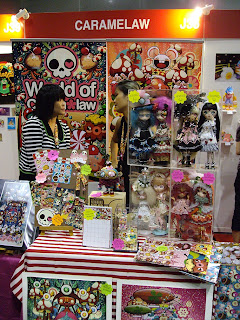 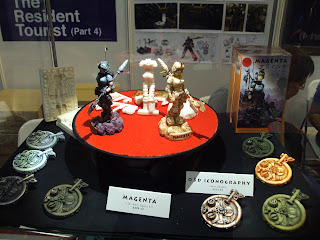 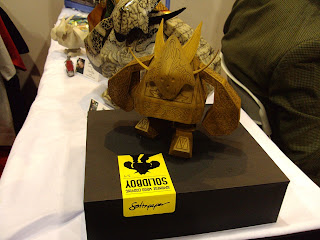 also, was very happy to see more sculpts in the alley! AND customizers for Blythes, Pullips, etc. i think 3D items attract me more than print media (duh...HA!) and i would so loved to have hung around and chatted with the booth holders but didn't know the proper etiquette on how to approach them :( the last pic, the javanese inspired carved figurine really attracted me as i love the infusion of traditional arts into new art forms (??) very nice! wish i'd taken the namecards like i thought i did -_-" 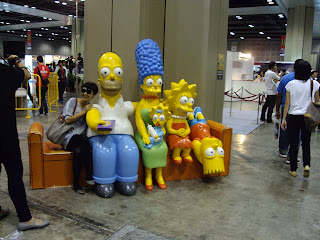 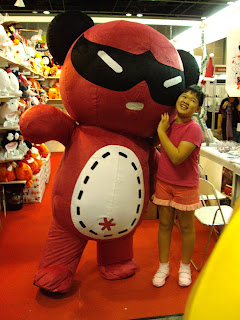 when i -did- stray from the alley, these caught my eye XD i ADORE the little girl's expression with the bear! i can't even identify what character it is, i'm so not caught up with the latest toy/comic trends :( i should get out more....*taps chin* 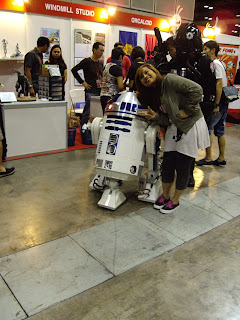 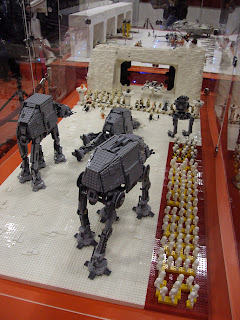 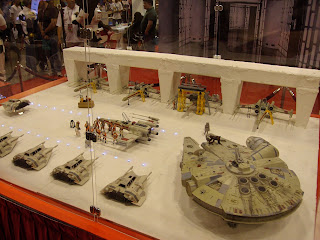 wahahha i could barely contain myself when i saw R2D2 making its rounds near Asuka's booth....and the lego star wars display at Legion 501's booth! i'm not a huuuuge star wars fan, but there are many many fond childhood memories of playing with star wars figurines, making ewok sounds and being forced to place bowls on the sides of my head since i was the only female cousin -_-" i think i would have rather played an ewok than leia. hurhurhur. or maybe even R2D2 (but never C3PO what a wuss). i have always found it amusing that i could tell from R2D2's blips and blots how he was feeling, but found it difficult to understand the human character's emotions?!?!?! at least he was clear with his expressions! 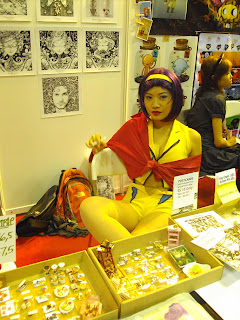 Kageshi - http://nymphsis.daportfolio.com
to satisfy cosplay fans....i have just the one pic...it was so funny how this pic came about. Asuka has a better pic in her camera, and this lady was at the previous STGCC so it was a very happy reunion this year (i vaguely recall bumping into her last year during my brief stopover at Asuka's '09 booth) when finally FINALLY all 4 of us at the booth (Asuka, Bjornik, me and Bjornik's friend) recognized her as Faye Valentine from Cowboy Bebop. she mentioned that we were the first and only group of people to recognize her!! frankly, the joy from me might have stemmed from feeling so lost as countless cosplayers walked by all day and me unable to recognize 80% of them T-T so we got round to chatting about how it's nice to see a revival of the 'classic anime/manga' cosplays (pikachu DOES NOT COUNT GRRRR) as the recent cosplay costumes just seem too similar in style.


i think i annoyed her with my constant jabs at looking for Ed, who is not one of her fave characters, to put it lightly :P 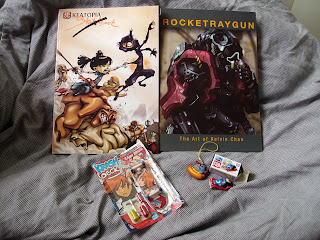 Kelvin Chan - http://rocketraygun.blogspot.com/
wah heheh. i forgot to take a pic of rocketraygun's booth, which was right next to Asuka's -_-" i'd wanted to chat with him too but he was busy all day with sketches....only managed to chat with him briefly after the event was over for the day! got him to autograph the book for my bf too (it's got mecha art in it, i'm not all that into mecha stuff). 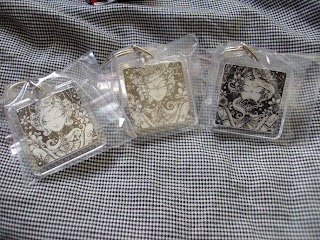 as introduced earlier, i got these special 'for friends only' keychains from Bjornik! <3 them, gotta find a place to display 'em.... 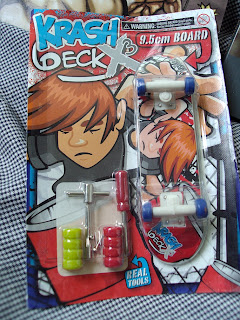 i think Asuka got this as a door gift, and gave it to me ^ ^ Yotsuba thanks you greatly for it! HEE HEE! she knows of my <3 for tools, in miniature and life-sized :D 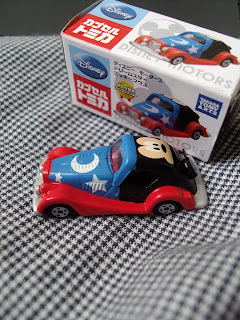 and who could resist the gashapon machines HUH HUH???? this is like, a 1:2 version of the takara tomy cars that i collected as a kid! although i only remembered them as Tomy cars hrmm..*frowns deeply* up till my early teens i would spend hours in the toy section staring at the drawer front displays of the cars, i still remember my fave was a bakery delivery truck....i must have lost it in one of the many moves *SOBS* 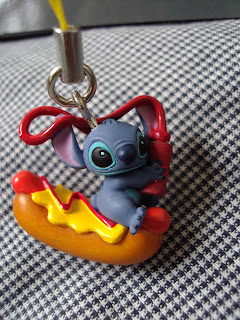 and yayyyy stitch!!! i seem to always always try for at least 1 stitch gashapon machine heheheheh

the highlight of the day has to be near the end when was i re-acquainted with a very very old friend of mine from my IRC days...if i could i would not stop hugging her i was soooo very happy!!! we'll be meeting up again this week for a movie...YAY YAYYY~! 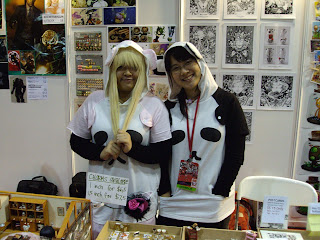 thus concludes a very lengthy post about my one-day 'stint' as Asuka's helper at STGCC 2010! i had a great time, thank you for giving me this opportunity Stephanie! *MUAKSSSS~!!!~* (oh and that's not me, but we snagged her for this shot as she was wearing the same panda shirt as Asuka LOL! thanks for being so sporting!!)