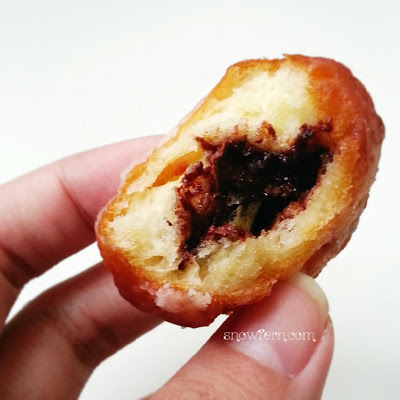 YUMMMM!!!! My cousin and I baked some chocolate filled mini-donuts yesterday! This is the first time we've ever tried working with yeast, and it was really, very easy! I wanted to write a little about it, but couldn't decide where to document it, and since alot of personal stuff winds up on this blog anyway, here it is! KEK 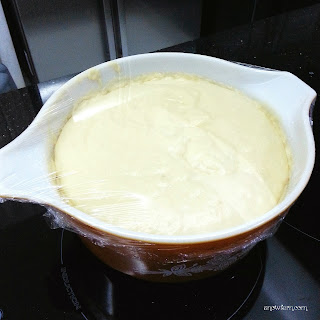 Cousin is quite a fan of the ones at IKEA, and since I'd never been to her new place, we decided to try out baking (or in this case, frying) donuts on my first visit!

A quick search on Google turned up this recipe:

I had always wanted to try making my own breads, but was afraid of messing up as I had read horror stories about how yeast was quite a beast to control. Buried in the back of my mind was a reminder to try and procure more current stocks of yeast, and to avoid less popular stores to ensure this. Made a trip down to Phoon Huat at Hougang Central to pick up baking soda (in case we had time to make cookies, we didn't :( ), yeast and cinnamon. The rest of the ingredients were obtained at a Giant supermarket.

The above photo was taken about an hour after mixing everything together. 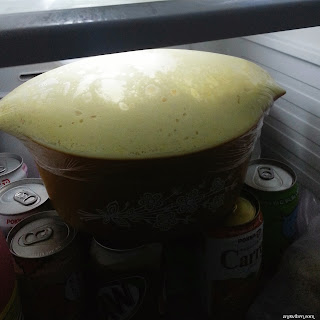 We were supposed to put the mix in the fridge to rest 2 hrs after mixing, but thought to just stick it in after 1.5 hrs as it had risen quite a fair bit. This was the result after returning from our swim + dinner....approx 3.5 hrs after mixing! 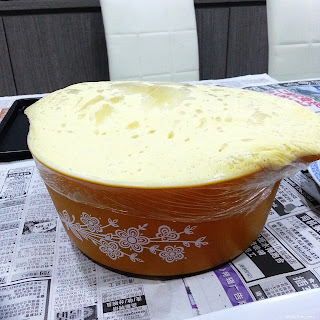 Time to roll out the dough! It flattened a little after we removed the glad wrap. It was a warm, humid day, and perhaps that helped the yeast along....Initially I had thought the dough too soft, and that perhaps I had skimped on the flour (or perhaps the humidity made everything alittle more wet), but with enough practice we managed to roll out quite a number of mini donuts :) No photos of that as by then our hands were sticky and messy......Cousin did the nutella centred ones, and I stuck to the easier-to-roll semi-sweet chocolate chip ones :P 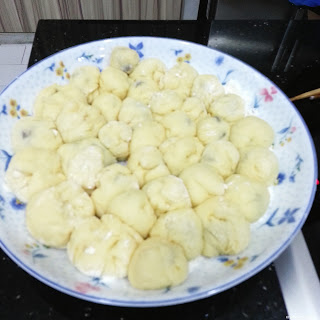 The instructions indicated to rest for approx 20 mins after rolling, and the donuts continued to puff up a little. WAY TO GO, YEAST! :D We managed to get about 3 batches of the above number of wee little donutsu~! 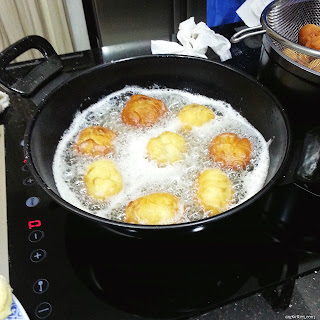 Furai~ Furai~ Furai~ Canola oil was used (it's a high smoking point oil?) and OOOOH LOVE THE INDUCTION STOVETOP so easy to clean, and a cinch to use! By the time we were done it was really late, and as usual when we have fun, forgot to take photos of the finished -____-" in fact, by the time I got a lift to the station, it was close to 11.30pm and thank goodness I didn't miss the last train wahaha. Did forget to take with me my swimming costume though =3="""""

We made a date to try out perhaps muffins next week. Or cinnamon rolls! OR DARE WE, BREADS?!??!? nyahahahaha. And of course, swim, while we wait for the yeast to do its work :) 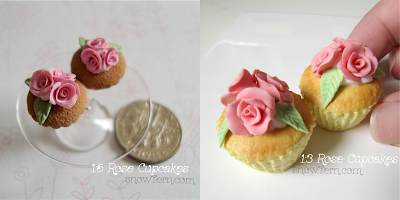 Cooking aside, I also worked on a custom request, you can view the blog entry over on my doll blog here:

This week has been an up-and-down-and-up one. BF surprised (shocked?!) me with some pretty good news, that's brewing and will take a long time to mature, so....haha. just wanted to note it down :) All-in-all, a fantastic week!


Weekend is here! Hope you have a great weekend!!
Posted by Unknown at 8:23 PM