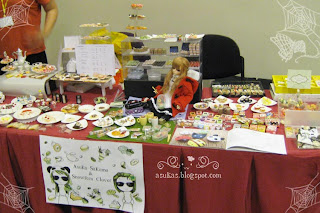 that's me, "tak glam" (totally without glamour) as we say here in Singapore as usual. i don't think there is in my whole history a 'proper' and 'decent' photo of me. for my funeral, they would probably have to make do with my grainy identity card photo, which bf describes as 'psychotic'. nice.
*snort*
ANYWAY! i'm baack!!! yea i'm still so happy from TDA, and the nice day out with bf yesterday :) had to source for some 1:3 bento boxes and such, but my mind is still reeling from the AWESOMENESS of it all. most of it is relief that it wasn't a total failure.

i had actually written a whole lengthy post, of the people i met and whose names i could remember, then it occurred to me that they might want to lie low. so i'll just thank in general all those who came and supported us. it means, really. more to me than i can express. but just to give you an idea of why i was so frenetic and frenzied, well. last tuesday, i was napping with the help of painkillers (my neck bunched up from all the tension + anxiety) i dreamt that i didn't sell anything. i dreamt also that the organizers helped me shift my booth to an area with more traffic, but everyone simply walked by without a glance! T-T i tried to deal with all this anxiety and lack of confidence, and finally cracked and told my closer friends Asuka and CH how i truly felt. they were both so encouraging, and later, i told my cousin and Sans too.....i think short of holding my hand throughout the event, they were all constantly reassuring and now that i have a chance to calm down, yes, i was being silly *embarrassed*

- to all my customers, and flickr friends and dA friends who popped by to say hi! i'm sorry if i didn't get a chance to chat more....i donno what else to say now but i was truly feeling so much panic!!! did i look like a maniac grinning all the time? i was trying so hard to hold myself together LOL!

- my apologies to one of my first few customers, i hadn't even gotten the booth arranged properly and i know i should have used my calculator LOL i feel so silly now. the exchange went something like this:

- Alvin, so nice to finally meet you! and thanks for hanging around and showing me the pics...i am serious about that collaboration suggestion hor! ;) (CHUN IF YOU ARE READING THIS OMFG YOUR EARS GOT BURN OR NOT WE TALKED ABOUT YOU LEY ;) )

- Jennifer....you are such a sweetheart :) i am so grateful for your support through these years, silent you may be hehe! hope we'll get a chance to play with clay together some time!! ^ ^ now that you're in blogland too, CONCENTRATE ON YOUR STUDIES O~ :P ganbatte! (yea i know, i'm such a nag, my maternal instincts kicking in LOL! gomen!)

haha i'm not accepting an award ley, why like that huh!??! *sheepish*

i also feel so thankful and grateful for the smooth and wonderful organization of the TDA committee, which i believe consisted of only 2 people this year :O :O :O!! Jamie and Sharon, THANK YOU!

this year felt a lot more intimate, i think due to the location, and also because i am now familiar with the process and also the fellow booth holders who were at 2009! some of whom became friends too :) i know that when i get my doll, i promise i'm saving up to collect from as many of them as possible :D

on to the pics, all of which i've grabbed from my contact lists on flickr, i do hope more can give me permission to use theirs. for those i've used here, i've gotten permission, otherwise, you'll have to click on the links....sorry for all the extra 'work'....haiz, i still feel so sheepish for forgetting to take pics :-/ i don't think i even traversed the right side of the hall.....yikes -_-" 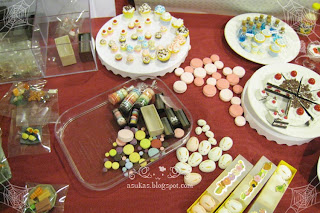 i think mainly because my booth was such a disaster zone, and NO DOLL, there will probably be few to no pictures :( sadness....aiya nevermind. credits for the first 3 pics go to Asuka (ARIGATOU~) who this time round, had her wits about her, unlike me. 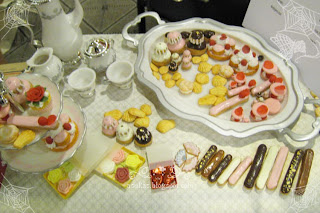 i was most surprised to see that none of the french pastries sold :O in fact, most of my customers who even noticed these asked me what they were.....:O i had totally neglected to take into account that since there's no Laduree in Sg, and since Marie Antoinette isn't such a popular movie here either, that they wouldn't be aware of the existence of these items? i'm pretty sure they are recognizable for what they're supposed to be judging from the online attention....but gahhh lol bad move on my part. no matter. i'll put them up for sale here/etsy/and see if anyone else is interested..
i did make some packaged sets, like the rose rakugan boxes, as well as the chocolate boxes, but they too went largely unnoticed. bleh, -i- thought they were cute :P oh well! i had forgotten to take pics of my favourite sets, the usagi manju, but luckily Jennifer did.....thank you for the lovely pic! they look quite cute peeking out from the box hhaha! 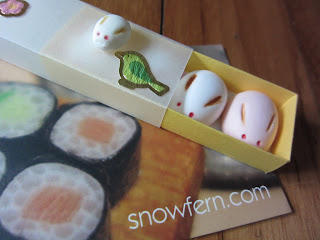 i also stupidly neglected to make new namecards, had only 13 pcs remaining, 12 of which went rather quickly. someone even commented that they didn't realize it was a namecard until i mentioned it....gah haha! *doh* the boxes went rather quickly, i made only 7 of them. and did not take pics -_-" so i really treasure this pic cos the boxes were my fave ones of all the packaged items! ^ ^
PERSONAL STUFF, QUITE ICKY, NOT FOR THE ICKY-ADVERSE (eh then probably they wouldn't be reading this disclaimer cos my blog does tend to go on the TMI route...kekekeke)
=============================================================
a few noteworthy things happened after the event too, most notable of all, is the discovery of another allergy. although i always had a strange allergy to soyabean milk and soyabean curd (i go into a coughing fit, can't breathe properly and somehow generate alot of bubbly phlegm, followed by a fever), i could always take tofu (which is made with soy beans!) and drink yong tau foo soup, eat soy beans whole etc.....so i thought it might have been an anti-coagulant that i was allergic to....but we had some grilled rice cakes at MOF (YUCK they didn't grill it long enough, it was still stuck to the plate, gummy, no brown-toasty-goodness ACK) and i didn't even finish the piece with the Kinako....i must have only ingested miniscule few stray grains of it and BAM. few seconds later i'm coughing and wheezing, and off to the toilet. GAHHHHHH!!! ok stay away, Cindy, STAY AWAY. bf thinks powdered soybean might be the culprit. sounds entirely plausible!
just wanted to write that down so i remind myself. it's so stupid how strange allergies pop up later in life, and you're like so used to the way things 'used to be' that it takes extra effort to learn to avoid stuff. i hope i don't develop anymore allergies, CRUD.
OK! i will try and get back to whatever normal is for this blog soon. i still want to host that 400-follower giveaway, but i think that'll have to be in a separate, less wordy post, since nobody mentioned anything in the previous one HA HA.-_-"
Posted by Unknown at 12:03 PM