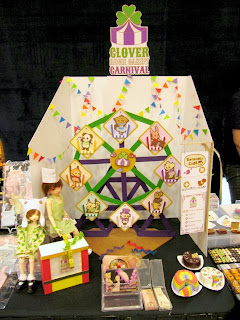 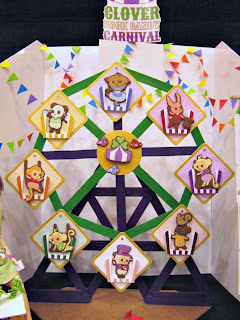 The event was a success! First of all, big big thanks to Arion and Adit for organizing the first Singapore Doll Carnival 2013 (SGDC2013)! Asuka was so much calmer than I was...somehow even with my brother Rayner's help, my hands were shaking all the while setting up the booth and sales display o.O Crystarlia even brought her crew down as helpers (I imagine them to be mini barkers XD) and phwoaar, she's one mean salesperson XD XD XD

So as you can see, the above is what Asuka and I had been working on, our first proper collaboration ^.^ she did all of the original illustrations and turned the characters into SUPER ADORABLE 'iced cookies' I executed the ferris wheel framework and other odds and ends to 'complete' the booth. she's so talented, i'm always enthralled by her artwork! 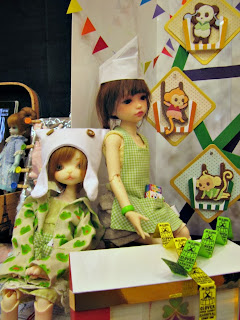 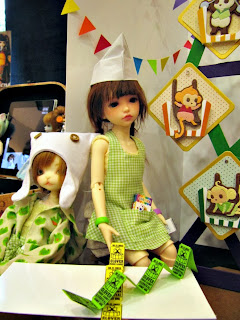 Our dolls, Ayame and clover even have little matchy matchy aprons XD not that you can see it in this sea of green HAHAHA reedip. 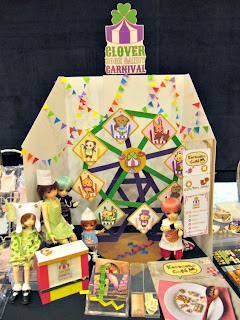 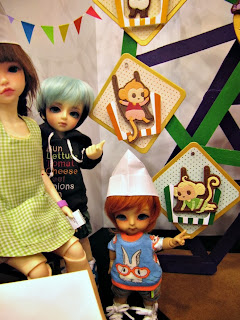 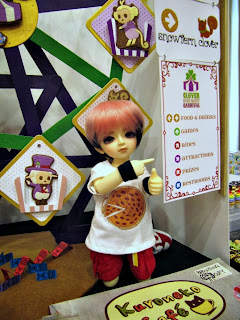 hwa hwa hwa an acquaintance wore a 1:1 t-shirt version of the 'hamburger' hoodie/sweatshirt XD pity i couldn't catch her to take a pic together with the doll XD 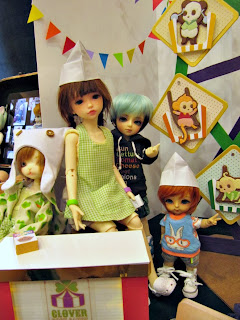 chilling out at the ticket counter XD 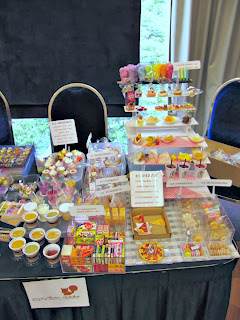 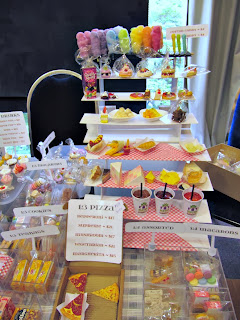 so like, i was going to take pics of our booth but before I got round to Asuka's setup I got distracted (OMG ATTENTION SPAN OF A GNAT) and didn't even manage to take a pic of my full setup!!! this was taken I think either midway or towards the end (prob midway, judging from the number of hot drinks remaining...)

as per my previous booth experiences, here's a blow-by-blow account of what my mind has chosen to retain huhuhu.

- woken up by Asuka at 7.23am to meet for breakfast.
- arrived just shy of 9am at *scape
- felt the first flutter of nerves while queueing for food. Ray quipped "it's just hunger" and I was immediately calmed XD GOOD TACTIC
- it had rained pretty heavily earlier in the morning and was still drizzling as we made our way to the event hall. poor vendors on the ground floor :(
- arrived at the hall at 9.30-ish to discover Adit pacing around a little frazzled by the empty hall. tables and chairs were due to arrive at 9.30, but there was some miscommunication between the management and tables/chairs co. (huh) so we plonked down on the floor at our designated area, and got DOWN TO BIZNESS
- had a fun time bantering with some friends who coincidentally (or not?) had a booth next to ours, though separated by a pillar. we jested that it would have been alright to sell on the floor, flea-market style XD XD
- furniture arrived around 10! yay! Event opening delayed till 12. unyay :( but it didn't matter, cos as per previous event experiences, most of the sales would be within at timespan of 2 hrs anyway XD
- BLUR BLUR BLUR BLUR BLUR BLUR BLUR
- 2+3ish? hungry. lunchtime! Ray helped us get macD ebi burger meals (YUM!) but I'd forgotten to ask if food was allowed in the hall XD we took turns to eat on the ground outside the hall HHEHEH
- traffic wound down a little after lunch, but i was still in a daze for most of the down-time, and shoulder started acting up again, so Asuka gave me massages woooooo KEKEKKEKE caught up with friends and....overall still general blur. 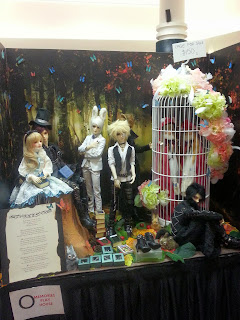 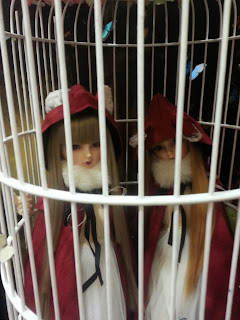 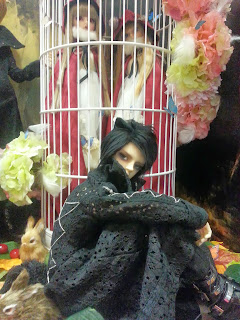 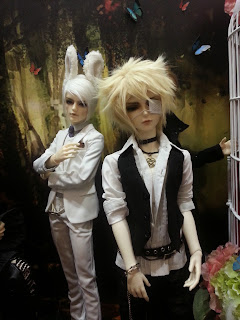 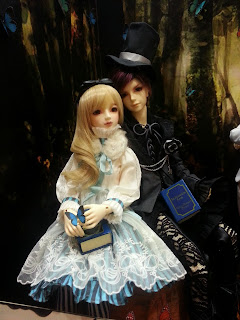 - took a brisk walk around the hall with Crystarlia but didn't manage to take pics of all the beautiful booths, save one, Jo and Joey's who WON the best booth display prize!!! GRATZ!!!!! SO HAPPY (cos they are people I actually know hahhahhahah :X ) WELL-DESERVED WIN OMG look at those dolls T-T GAWJUS
- bf came down to help lug stuff home...all 4 us of went to Arirang at Liang Seah street to celebrate!!!!


teething problems and initial panic aside, I think the event went pretty smoothly! kudos to the organizers and hope we see SGDC2014!! :D :D :D


the rest of the week will be spent recuperating and cleaning up my room, listing 'leftovers' on my Etsy, and getting ready to move on to newer projects. As for commission slots, I had promised that I would re-open them to selected projects, but apologize beforehand that there might be a long wait, and hope for your kind understanding and patience as I sort out stuff. Meanwhile there are a number of emails and convos to reply to, will do so ASAP :)